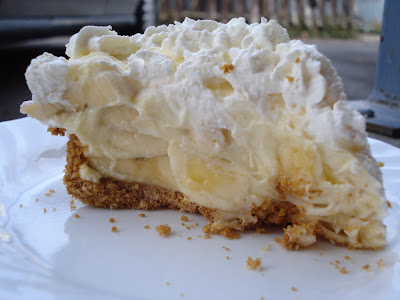 I am a little weird. I totally spaced that Tuesday is St. Patrick’s Day, but I had absolutely no trouble remembering that Saturday was Pi day (3.14). This tells me something important about myself: I probably think too much about food.

This year, we had it narrowed down to two pies we were interested in: Three Plum (which we’ve never seen a recipe for but heard about on Pushing Daisies), and banana cream. Because we haven’t really figured out the logistics of three plum (and we think the texture could be really off), we decided to be safe and go with banana cream.

My usual banana cream pie is actually made with pudding and bananas and a little hint of cinnamon. When we ran the idea of banana cream past our good friend Adam, who was coming to dinner, there was a small pause over the phone. “… this is perfect. I ask for banana cream pie for my birthday every year.”

And then I knew that I couldn’t go for the cheater kind. I absolutely had to make a REAL-DEAL-NO-NONSENSE-FULL-FAT-HOMEMADE-FROM-SCRATCH banana cream pie.

I will be honest. I first thought of Paula Deen. After checking Food Network’s site for her banana cream pie options, I vetoed the chocolate banana cream and “banoffee” options, and felt very disappointed in her. I’m sorry, Paula. It’s nothing personal. Promise.

But salvation came in the form of Emeril Lagasse. Almost.

Emeril is rather famous for his banana cream pie with chocolate and caramel drizzle. Since he made his own custard, I decided to go with his recipe. But I had to tweak it, because it just wouldn’t have worked otherwise. So this recipe is inspired by Emeril, but it’s adapted for my taste.

I highly recommend that if you’re going to make this pie that you make it a day ahead. The banana flavor will intensify and you’ll think you’ve died and gone to calorie-dense banana cream heaven. Trust me. 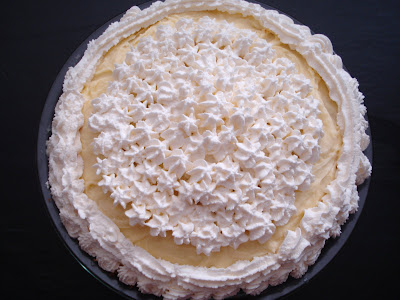 Directions:
Bring the milk, and 1/2c of the sugar to a boil in a medium saucepan, stirring to dissolve sugar. Remove from the heat. Meanwhile, whisk together egg yolks, eggs, remaining sugar and cornstarch till lighter in color in a medium bowl. Whisk 1c of the hot milk mixture into the eggs to temper them (so they don’t curdle. ew). Whisk in remaining milk mixture and return to the saucepan.

Bring to a simmer, stirring constantly (I use a whisk). Simmer about 5 minutes or until custard has thickened. Remove from heat. Strain through a strainer into a bowl if you want a finer texture. Stir in vanilla, coconut extract, and salt. Cover with plastic wrap, pressing down against the surface to prevent a skin from forming. Refrigerate about 4 hours. Custard will become very thick.

Whip 1c cream with 2 tsp sugar in a large bowl until stiff. Using a mixer or a spoon and a lot of upper body strength, stir whipped cream into custard until relatively smooth. It won’t be perfect. 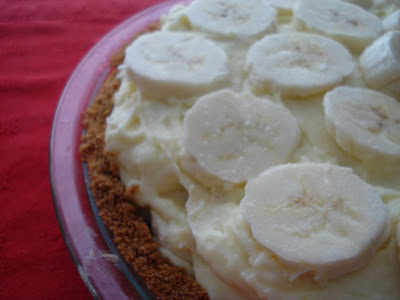 Combine crumbs, butter, and sugar. Press into a 9″ pie pan. I find this easiest using a cup to pack it down evenly.