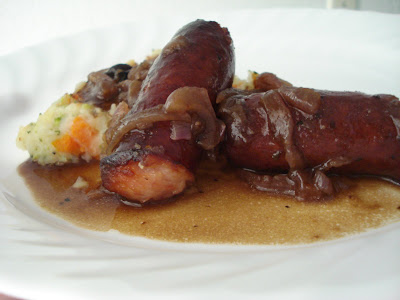 So remember that Cook Around the World thing? Believe it or not, it has stayed going strong all year. It may be hard to believe, but it’s true. The only reason you haven’t seen anything about it for a few months is because my results have been less than photogenic.

We made some really embarrassingly unattractive, yet tasty, slow-cooker Swedish meatballs one month, a southern meal complete with some very embarrassingly ugly greens with a hot bacon dressing, etc. another month. I’m just sorry to tell you things have been so ugly around here this summer!

Michael and I, in honor of the release of the Harry Potter movie this month, decided to celebrate with a British meal. Who better to look to for inspiration than Jaime Oliver? We settled on something we’d watched him make one morning and threw in our own twists. Bubble and Squeak!

Turns out, bubble and squeak is very traditional. It’s sausages or meats, served with leftover root vegetables that have been turned into a mash. We made ours fresh rather than with leftovers, and it was SO delicious! 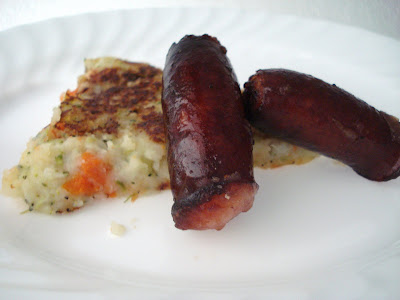 For sausages and gravy:

For sausages and gravy: