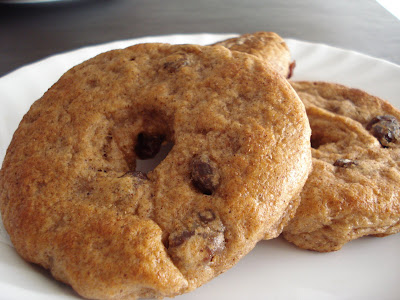 Cinnamon Raisin Bagels are Michael’s favorite. And Michael is my favorite. Therefore…

It’s all very simple really. I’ve really been enjoying recipes from my new cooking friend Emily, and when I told Michael I wanted to make bagels, he asked if I could pretty please make them cinnamon raisin kind. And we are still in the “make other people feel queasy we love each other so much” stage after only 8 months of being married, so if he were to ask me to hop on one foot accross the country to pick him up some syrup from Vermont, I would hop until my foot fell off and then switch feet.

Luckily for me, Michael never asks such things. Rather, he asks for simple, lovely, delightful things. Like bagels, and homemade pizza, and picnics, and kisses, and such. *sigh*

You don’t have to make these cinnamon raisin bagels. The recipe is really quite adaptable. Emily breaks things down easily and wow, these are delicious. On their maiden voyage in my kitchen, I made them as directed by the recipe and they were delicious plain. I am also going to try orange cranberry at some point, and I suppose that chocolate chip or cinnamon swirl, or even onion or jalapeno cheddar (if you’re into that sort of thing) would be good. 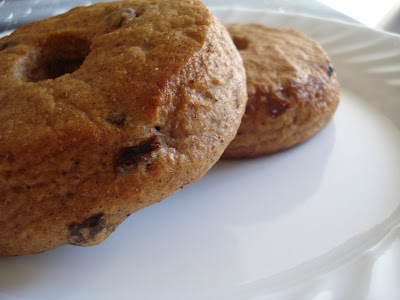 Directions:
Scald milk and set aside to cool. Meanwhile, dissolve yeast and 1 Tbsp sugar in warm water. Allow to proof for about 10 minutes. Pour yeast mixture into a large bowl. Add warm milk, remaining sugar, salt, oil, and cinnamon, if using. Stir together. Mix in half of the flour (1 1/2c white, 1 1/2c wheat). Cover bowl with a damp towel or plastic wrap sprayed with nonstick spray.

Allow to rise 40 minutes. Stir in raisins, baking powder, and enough remaining flour to make a rather stiff dough. Pat out into a 9″x 15″ rectangle and cut using bagel cutter or a cup. Cover bagels and allow to rise an additional 30 minutes.

Bring a large pot of water to a boil. Add 2 tsp baking soda to water. Drop each bagel in boiling water for 30 seconds per side. I let mine dry while I’m boiling them by placing finished ones on a cooling rack over a baking sheet. Transfer to a baking sheet lined with parchment or sprayed with cooking spray. Bake at 400 degrees for 20 minutes, rotating halfway through.

**Note: If making orange cranberry bagels, substitute dried cranberries for the raisins and the zest of 1-2 oranges for the cinnamon. If making cheese bagels, sprinkle cheese over bagels before baking.