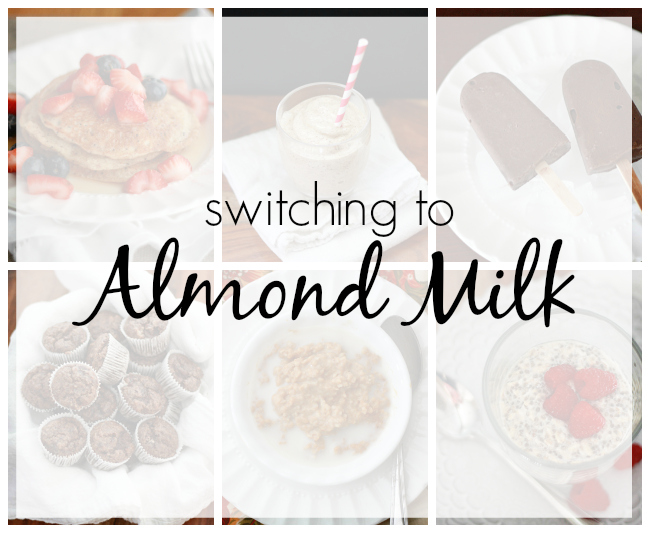 Thanks for tuning in to the posts on Monday and Tuesday this week about going gluten free. Making a diet change can be so overwhelming and it’s easy to feel lost. Going dairy free was much easier than gluten free. The options were clear: stay away from cheese, switch to coconut yogurt, and skip dairy milk. The only real decision we had to make was which alternative milk we were going to choose–coconut, hemp, rice, hazelnut, cashew, soy, or almond.

Michael and I were never much for milk drinking, but we love a good bowl of cereal or granola with milk, love making smoothies and popsicles, and love milk with oatmeal. Before Sophie came along, neither of us had ever tried a dairy milk alternative, so we felt a bit… weird… about trying a “milk” made from nuts or soy. When I had to go on an allergen elimination diet while nursing Sophie almost three years ago, I needed SOMETHING, so I decided to try almond milk. After a few weeks of me saying “I really think I like this better than dairy,” Michael finally tried some. And we’ve never gone back. 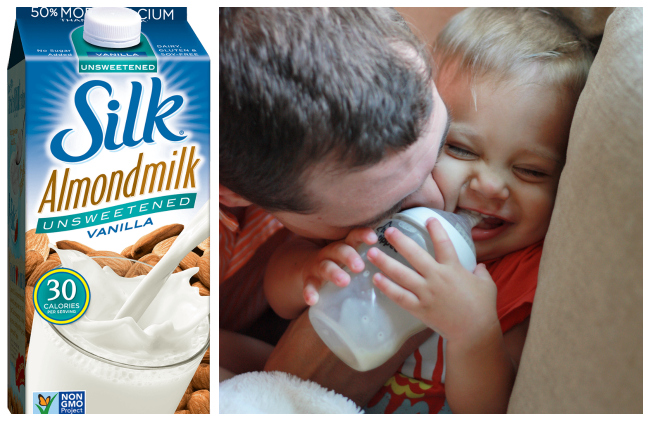 Even before going totally dairy free last April, we’d “converted” to almond milk whole-heartedly. We all drink it now, including Milo. Here’s a bit of the run-down:

1. While most brands don’t taste significantly different, we buy Silk brand. Our Costco recently started carrying 3-packs of Silk Unsweetened Vanilla Almondmilk for a great bargain, but most grocery stores these days (including Wal-Mart and Target) run sales regularly.

2. We prefer unsweetened original or unsweetened vanilla. If you’re just making the transition from dairy to almond milk, you may want to start with the “light” version that’s just slightly sweetened. I find that the unsweetened vanilla gives just the right amount of sweetness with that vanilla undertone.

3. Nutritionally, almond milk is a great choice. The unsweetened varieties are only 30-35 calories per cup (compared to the 80 or so in skim milk). Silk doesn’t use GMO ingredients or carrageenan (a seaweed-derived gelling agent that can cause inflammation). It’s also full of calcium–50% more than dairy milk. You also don’t have to worry about how the cows were treated and raised and there’s no concern about antibiotics or growth hormones to worry about.

4. Lastly, as far as using almond milk exclusively for children is concerned: first off, you’ll want to talk about it with your pediatrician. We didn’t switch Milo till he turned 1, and because our diet is rich in healthy fats and proteins, there was absolutely no concern over Milo missing out on anything by drinking almond milk instead of dairy. You’ll have to do what works for you, but this has been a very smooth move for us.

5. Bonuses of giving up dairy: my skin is significantly clearer, I don’t get nauseous all the time anymore, Michael lost 15 pounds and is even off the stomach medication he’d been taking for the last seven years because it turns out dairy was the culprit behind his flare-ups!

I worry that I’m starting to sound like a commercial, but so many of you have emailed or asked me about going dairy free. What it boils down to is this: I MISS CHEESE. But, milk? That’s never been a sacrifice.

If you’re curious about Silk or want to try it out, you can sign up here for coupons and other special offers. Not sure where to start recipe-wise? Here are a few of our favorite recipes featuring almond milk:

Feel free to chime in with thoughts or questions below. I’ll do my best to answer quickly!

This is a sponsored conversation written by me on behalf of Silk. The opinions and text are all mine.