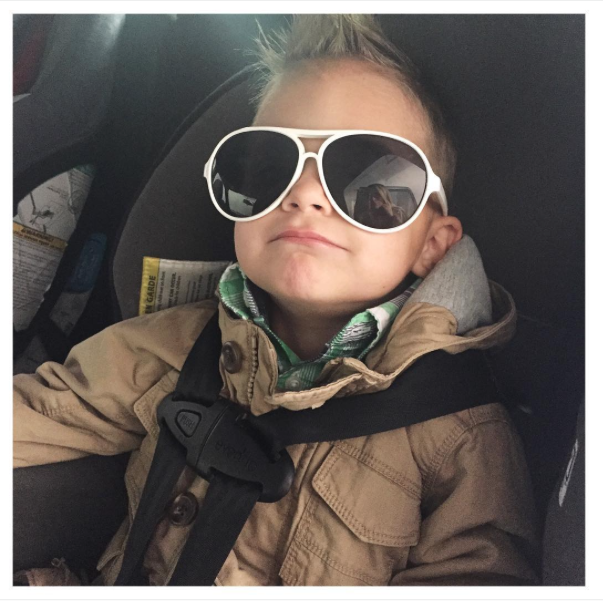 Milo is turning 3 this weekend (!!!) and we’re celebrating by…being terrible parents. I have a church luncheon I’m helping with tomorrow, plus there’s church and some church responsibilities on Sunday AND the kids have been fighting a capital C COLD this week, so… we’re lame. And I’m just counting on a lucky star that he’ll feel loved and celebrated in a three year old sort of way. And also that he won’t remember how lackluster this birthday was in the celebration department.

My one consolation is that he’s getting a bike he’ll be excited about, some Batman LEGOS, and plenty of cars and trucks from his doting grandparents (YAY FOR GRANDPARENTS!). Plus, there’s a dump truck cake with the world’s best frosting coming his way. So at least it’s not a total bust. Or something.

In the meantime, this Five Fact Friday has been taken over by our favorite almost-three-year-old. Here are some of our favorite things about Milo right now…

Milo is still OBSESSED with “vehicles.” (All caps, underlined, italics, nine exclamation marks, and twelve megaphone emojis.) When asked what he wanted for Christmas? “Wotsa behicles.” His birthday? “Cars and trucks.”

Trains, planes, cars, trucks, construction vehicles, garbage trucks, school buses. All of it. He makes all kinds of vehicle noises, knows what every vehicle does and what a whole lot of vehicle parts are. It makes him reeeeally easy to shop for and pretty darn easy to entertain (as long as I’m very close by).

I’ve now seen every episode of Mighty Machines on Netflix and have to sing a (made-up) song about a garbage truck before Milo goes to bed at night. It’s only a matter of time before he starts learning about engines and then I’m going to have to spend my evenings reading car manuals to keep up. Pray for me. 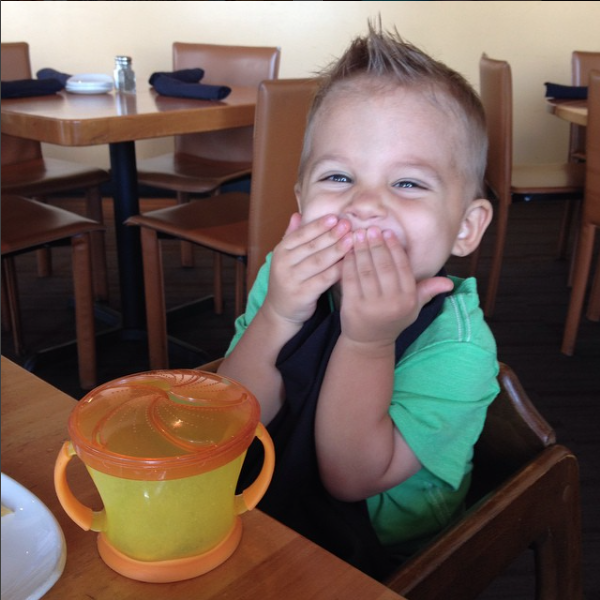 He’s SUPER chatty. Thanks to a life of Sophie’s therapy appointments and a natural predisposition for sharing his opinion, Milo was one of the chattiest 2 year olds (if not THE chattiest) I’ve ever met. His vocabulary is astounding, his diction is remarkably good, and we often get stopped when we’re out as people remark on it. He’s SO earnest and animated when he talks. There is no guesswork involved in figuring out what he’s feeling. Ever. He’ll let you know.

He loves me. Through and through. He wants me for comfort, me to help him out of bed, me to help him get dressed, me to sit next to him, me to hold him. It’s darling and sweet and bursts my heart open every time he says “you are my bery best friend” or “Mom, we’re best friends together.” It’s often exhausting and leaves me feeling a bit claustrophobic by the time Michael walks in after work, but at it’s heart, I hope it stays this way for a LONG time. I want him to want to tell me everything about his day and to be happy to see me for a long time. The clock is ticking on that, I know, but for now, I love my little friend. (Also: HE SNUGGLES A LOT!) 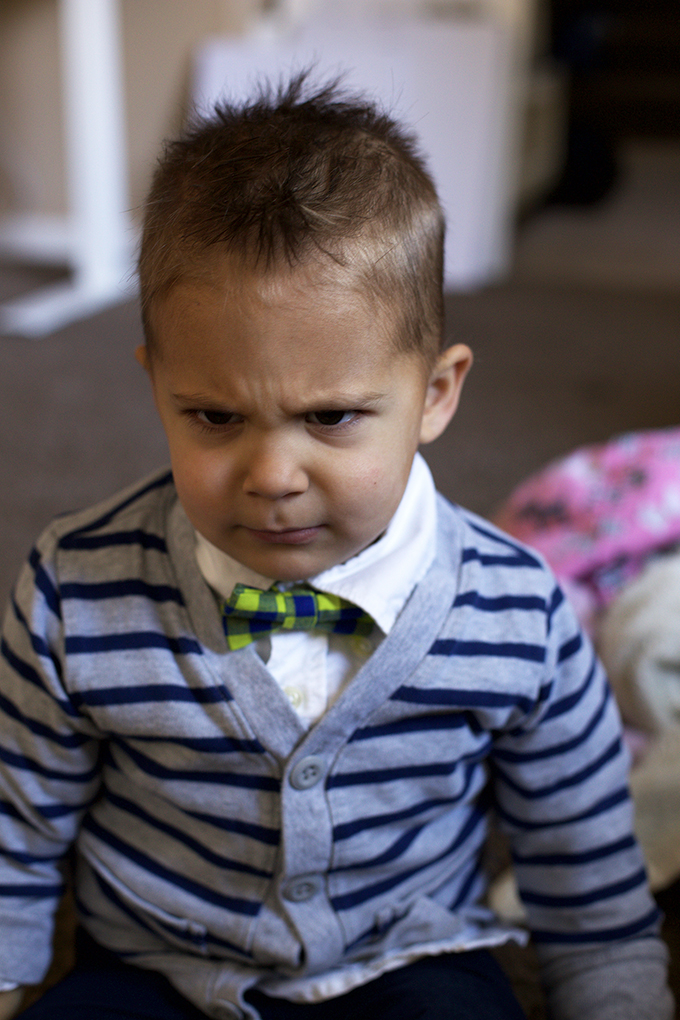 Hates and Loves and Other Things. Milo decidedly hates sleeping in, shoes, and (most of the time) pants, though we’ve made great strides in the pants department (thank you, jeggings). He hates all vegetables (including potatoes in all forms–even French fries!) and won’t touch most mixed foods. He has a MAJOR sweet tooth. He lives for bananas, but also just goes crazy for chocolate covered almonds, pumpkin muffins, and any sort of candy or dessert he can get his hands on. He can throw an epic tantrum (he learned from an expert), but he also forgives easily and often. He gives love and hugs when people feel sad, and loves to snuggle me throughout the day. 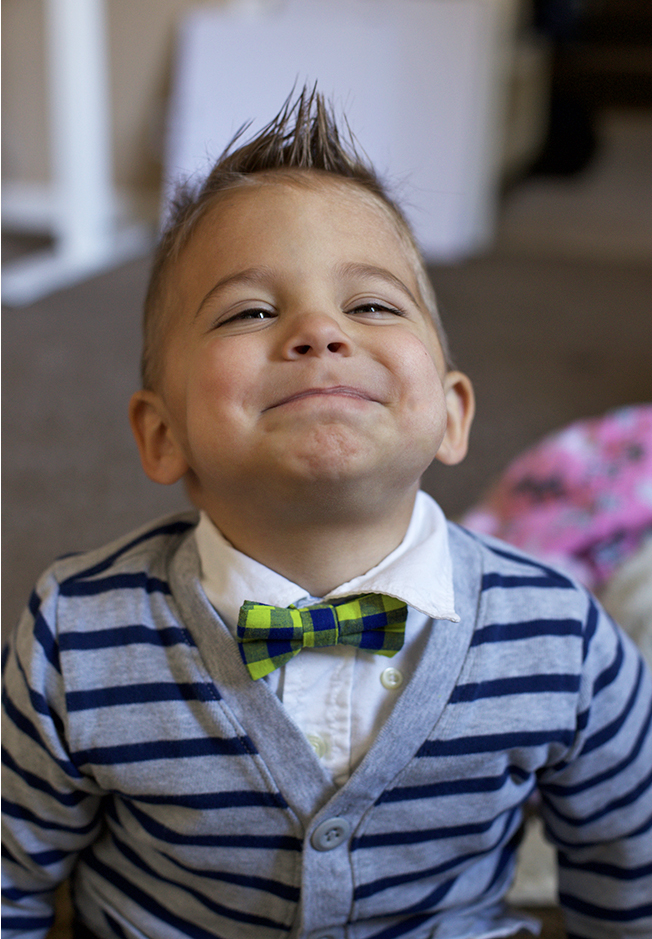 He’s a puppy. Michael and I have long joked that Sophie is more like a kitty/cat (adorable, her moods are a bit unpredictable and she can be skittish but also curls up in your lap at just the right moments. She also remembers everything ever so she can take a while to forgive) and Milo is more like a puppy/dog. He’s loyal, loves cuddling and rough-housing, staring out the front window to watch cars (see above), and his whole body gets excited and happy when someone he loves comes over or the delivery man (truck, really) drops off a package. 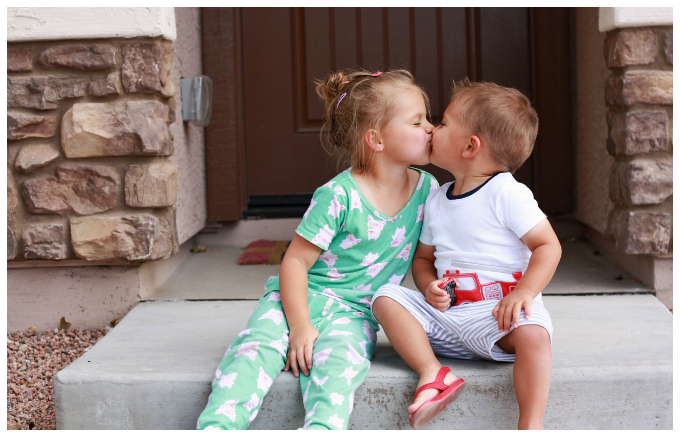 He LOVES Sophie. One of the things I’m most grateful for with Milo is his understanding, patient, and forgiving heart. From birth, he’s always seemed to be aware of Sophie and he really seems to read the moments when she needs more attention or intervention. He’s been a gem through thousands of hours of therapy appointments, and he’s her little social buffer. People fall in love with him instantly (have you seen those eyes?) and then they are much more accepting of Sophie when she’s not at her finest or doesn’t behave the way people expect.

Every year I gush about this, but I just feel like he’s the very best brother on earth for that girl. Don’t get me wrong–he knows exactly what pushes her buttons and has a lot of fun pushing them over and over (and over) again–but he also has a gentle patience and kindness and goodness in him for her. He just gets her. He’s always loved her fiercely and protectively, and I’m constantly envisioning them as teens and adults.

I have no doubt that Milo will be the kind of boy who makes sure she has someone to sit with at lunch and that people are being kind to her and to other people who are different or differently abled. If Sophie isn’t asked to a school dance, I can see him putting on his best suit and treating her to a magical night out. I can see him volunteering purposefully or reaching out and supporting others in subconscious ways. He’s just good and genuine and whole-hearted. Exactly the kind of boy a mom wishes for. 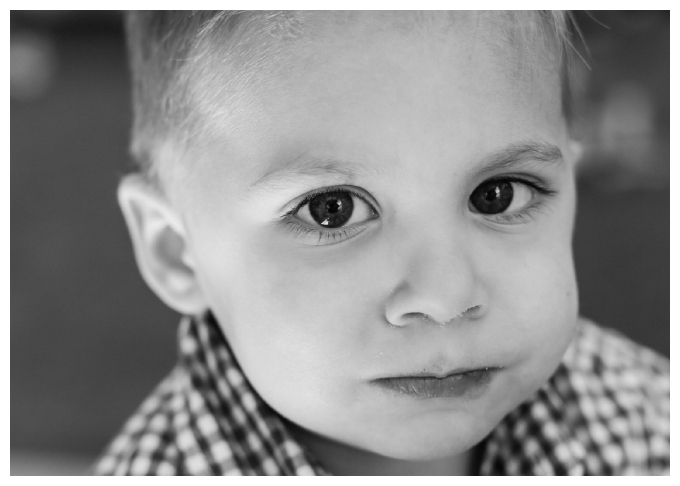 Happy birthday to Milo!
SO MUCH LOVE for this boy!