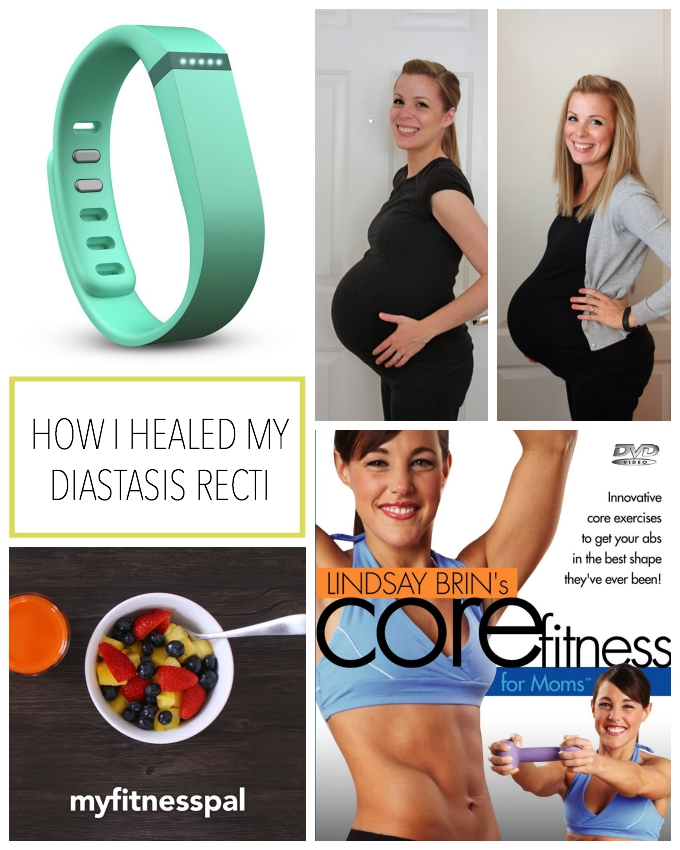 This post isn’t my norm, and is probably of no interest to some of you. In that case, let me direct you to the recipe index for some fun dessert browsing or the Five Fact Friday archives to look at Milo and Sophie.

I mentioned a while back that I had diastasis recti with Milo’s pregnancy and a few of you have asked me about it. I’m not an expert or a doctor, but here’s a little bit about my story. And by a little bit, I mean kind of a lot.

For starters, I’m 5’2″ and fairly petite with a short torso. At just over 7 pounds at birth, Sophie felt like a big baby for my first full-term pregnancy. And actually, upon Sophie’s delivery, as my doctor stitched up the tearing her superfast delivery had caused, my doctor (whom I LOVE) said with a pained voice, “oh, honey, I’m sorry. This is a big baby for you. I hope this is your biggest baby.” Other than the super painful tearing, my recovery from Sophie’s birth went remarkably well. I felt really lucky and hoped that would always be the case for me.

So, naturally, Milo decided to one-up his sister. For the duration of Milo’s pregnancy, I was horribly sick. He was positioned pretty low for almost my entire pregnancy (Sophie had been VERY high). I also gained more weight with Milo, though I ate healthfully and exercised regularly, just as I had with Sophie.

I was so wildly uncomfortable all the time because he was so low. My back pain was so bad that I actually slept on the floor for the last 5 months of the pregnancy because that was the only way to get the tiniest bit of relief. Desperately, I asked my doctor if he was measuring big, and she assured me that he seemed to be right at 50th percentile (just like Sophie).

I felt like such a baby for being in such agony, but it was nearly unbearable. Even two days before he was delivered, my OB said she thought he *miiiiight* barely weigh seven pounds and would be shocked if it were much more than that. I told her dejectedly that I was sure he had to be bigger than that.

At 8lbs 8oz and delivered after only a couple of hours’ labor, my doctor gasped and she said simply “he’s so big.” As they called out his weight, we all sort of gasped in shock then stared laughing. “I KNEW IT!” I said! Also, the anesthesiologist who we worked with pointed out that because of the way I was carrying Milo, he had literally warped my spine a bit (like a sort of pregnancy scoliosis), which would explain all the agony and pain over the last many months.

(side note: I know that smaller girls have delivered larger babies without medication and walked home afterward. I know my situation wasn’t the worst, but it sure was uncomfortable!)

While some separation of the rectus abdominis (6-pack) muscles is the norm during pregnancy to make way for an expanding belly, the separation often closes back up as you heal from delivery. It’s also totally normal to have 1-2 fingers’ width separation even after healing. This is not generally considered enough separation to cause concern.

I had a 4-finger diastasis recti, or separation of the rectus abdominis (6-pack) muscles after Milo’s birth, and after six months, I still had a 3 1/2 finger gap. Want to test for it yourself? Find out how to check it here.

Diastasis recti can be addressed in a lot of ways, from girdles & bands to certain exercises to surgery, and often reconstructive surgery is the only way to really fully close that gap back up (because, as I said, it’s normal and ok to have 1-2 fingers of separation even after healing).

What worked for me

First, losing as much of the baby weight as possible helped me to really identify what was happening under that soft layer of extra. This is part of the healing process anyway, so I hadn’t lost all my baby weight before starting to address diastasis recti.

I never went on a major diet. Instead, I kept track of my calories through the free MyFitnessPal app and continued to gently exercise with walks (and playing Just Dance with Michael to combat the stress of Sophie’s autism diagnosis, if I’m honest) and tracking it with a fitness tracker. At the time, I had a Nike Fuelband, though after it died, I bought a Fitbit Flex, which I’ve been using ever since.

When I was a health and wellness coach, MyFitnessPal was the tool I always recommended to my clients. I think it’s fairly straightforward to use and helps you be mindful of your calorie intake and output throughout the day. You can even import recipes from the internet (like my blog!) to see what the nutrition facts are. You can also sync it with a fitness tracker (like the FitBit) to include any calories you’ve burned through exercise.

Like I said, I started gently. Diastasis recti makes for a rough recovery. If you’ve had a C-section AND have diastasis recti, this is even more important. If you’re nursing, you need to be careful not to affect your milk supply. I first asked my doctor what she recommended, and she said to avoid traditional ab exercises until I was certain I knew how to properly engage my core. There are certain exercises you should avoid at first that can actually worsen the separation (things like twisting exercises or crunches).

It’s really (REALLY) important to learn how to properly engage your stomach muscles. Lindsay Brin is one of the best resources out there, in my opinion. She’s got videos and exercises that walk you through things really well.

While I was confident doing this before pregnancy, I used these exercises to practice doing that properly with diastasis recti. They seem overly simple, but if you don’t properly engage your transversis, you will not make much progress in any of your other exercises.

Doing core exercises while properly supporting my transversis abdominis closed my gap significantly and allowed me to get back to traditional core exercises, though even after 2 1/2 years, I’m still very careful about which exercises I choose. Planks are my go-to ab exercise. Plank all the day long (with proper core engagement). It will do wonders for you. And do be sure you’re doing crunches correctly if you decide to go that route.

Where I am today

Today, I have a 1 finger diastasis recti opening. I do lots of planks and plank variations, along with some careful crunches (engaging those muscles correctly!). I still have saggy skin and my belly button looks like a nightmare. If I ever want to take care of the remaining opening and saggy-ness, my doctors have told me the only remaining option is surgery. At this point, I’m just sticking with midriff-covering swimming suits and calling it good.

Have you healed from diastasis recti?
What worked for you?
Do you have any questions for me?