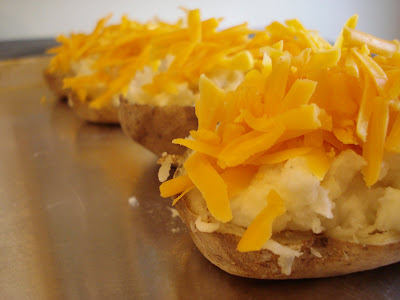 I’m done with finals!!!! After a VERY busy week that involved many more hours of studying, preparing, project-finishing, and working that I really had hours in the day for…I’m done.

So, dear reader (hi, Mom!), I can finally catch up on posting. It wasn’t that I wasn’t cooking, I just haven’t had two minutes to rub together since Sunday.

To be perfectly absolutely honest…I don’t really like baked potatoes. Like, at all. I’ll eat them, but…woof. I don’t ever just crave a baked potato. I tend to find them somewhat dry and lackluster. Which is disappointing being a vegetable person.

What’s a girl to do, then, but pull out the blah insides of a baked potato, stuff them full of delicious things, then pile it high with cheese?

I will say that this is the most basic recipe for twice baked potatoes ever. No, I lied, just butter and milk would be THE most basic. I get as exciting as sour cream!

I’ll include variations at the bottom. Any version is amazing. I think they’re substantial enough to be a main dish served with broccoli and salad, but you can buy smaller potatoes and serve them as a side dish to baked chicken or ham or…anything. Steak, if you’re a steak person.

***Note: I’m giving this recipe to you based on 2lbs of potatoes. If you’re making more, double or triple as necessary. ALSO–plan on cooking at least one more potato than you need. This will give you some freedom if a potato skin gets mangled while you scoop out the insides, etc.

And don’t be afraid of using low-fat milk and sour cream. I use skim milk and light sour cream every time. 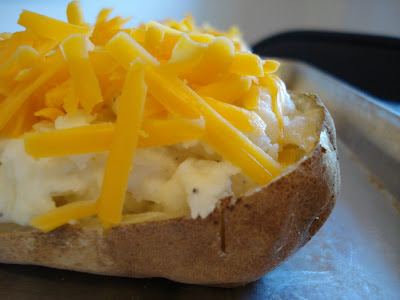 Directions:
Wash potatoes. While potatoes are still wet, sprinkle lightly with salt. Poke a few holes in the potato with a fork or sharp knife (this will allow steam to escape and will prevent potato explosions in your oven). Bake at 400 degrees for 1-1 1/2 hours or till tender inside.

Cut potatoes in half lengthwise. Scoop out insides of potato, leaving a slight border around the skin of the potato. In a large bowl, combine insides of potato, 2 Tbsp butter, 4 Tbsp milk, 2 Tbsp sour cream, and generous pinch salt and pepper. Blend with a hand mixer or smoosh with potato masher and forks. Adjust texture as necessary by adding more butter, milk, or sour cream until you make thick mashed potatoes. Adjust salt and pepper as necessary.

Scoop mashed potatoes back into potato skins. Top with grated cheddar cheese. Pop back in 400 degree oven for 10-15 minutes or till heated through and cheese is melty.

Bacon potatoes: Stir in 2 strips of bacon, cooked and crumbled