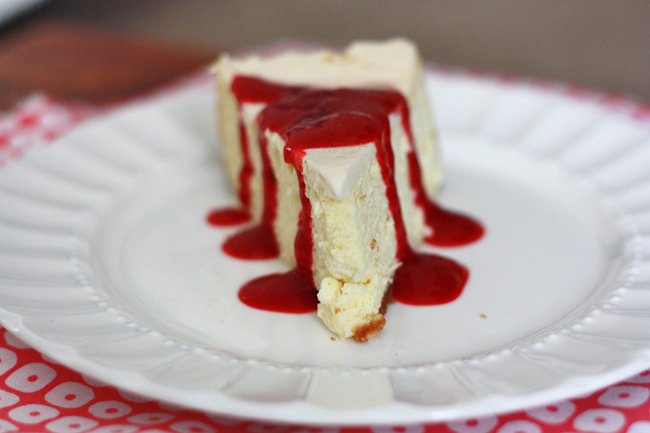 Here’s the cheesecake post I did over at Bless This Mess last Monday. Enjoy!

There are a few things in life of which I consider myself an expert: the proper way to slice a sandwich (diagonally, of course), how to sneak ice cream out of the freezer without being caught (carefully), and brushing my teeth and hula-hooping at the same time (yes, I can really do this).

I do not profess to be an expert on cheesecake. My only real experience making my own is with a Caramel Pumpkin Cheesecake with Gingersnap Crust I made a few years ago. So, when one of Michael’s co-workers was hosting a charity event dinner and asked if I’d make a few New York-style cheesecakes for the event, and I said “sure!” without really knowing what makes New York-style cheesecake so New York-ish… I thought I’d better do some research. 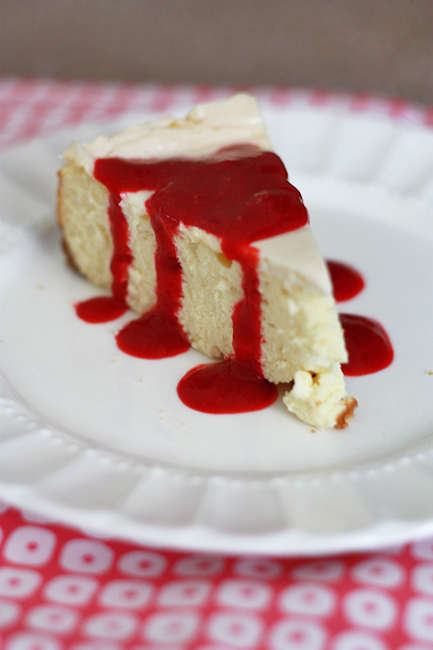 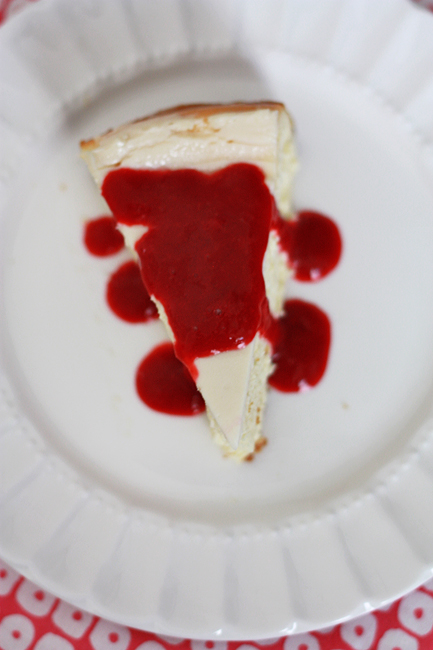 The answer, as I’m given to understand, is the addition of sour cream. Some recipes add sour cream to the body of the cheesecake, and other recipes (like this one) opt for a sweetened sour cream layer. I prefer this method, since it gives me a chance to essentially “frost” over any imperfections in the cheesecake itself. And never fear, it didn’t taste like eating a scoop of sour cream. Just like cheesecake-y goodness.

We tried ours plain and then smothered the rest in loads of homemade raspberry sauce, but you could certainly drizzle it with chocolate and caramel, sprinkle it with berries or, for a tropical version, some diced fresh pineapple, kiwi, and flaked coconut. Any way you top it, it is DELICIOUS.

Just when I thought this light, fluffy cheesecake couldn’t get any better, I discovered an added bonus: you can freeze the cheesecake to eat later! We froze some and thawed it in the refrigerator before eating it later. It was delicious and didn’t seem to lose anything in taste or texture, other than there being a touch of condensation on the top. I may not be a cheesecake expert, but my friends, I’ve achieved cheesecake nirvana.

Notes on the recipe: I made this recipe without using any low-fat ingredients. This is the real deal. Since I haven’t tried substituting any reduced-fat ingredients, I don’t feel confident telling you to use them. All I know is, this was to DIE for. 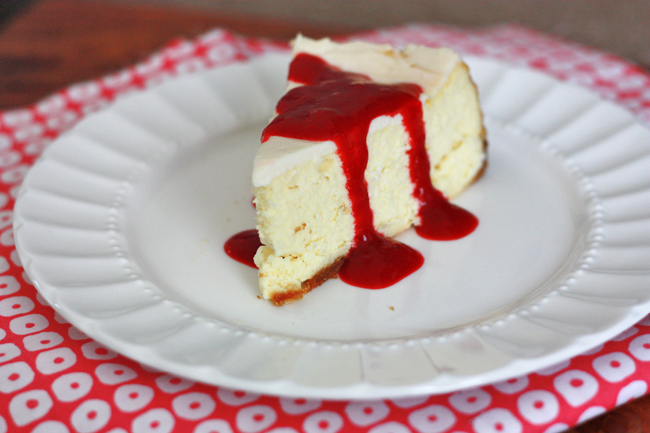