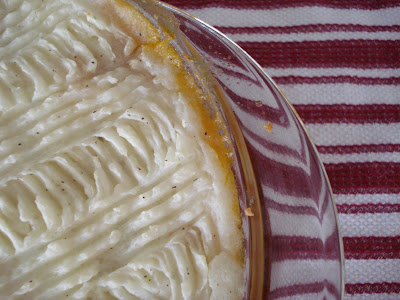 I know. I KNOW! It’s August, not September or October/November/December/Any other chilly month. But I’ve seen delicious-looking recipes for shepherd’s pie in about 4 of the 13 cookbooks I’ve gone through lately, and I just wanted to try it. I remember eating it a few times in my childhood, but I, like my mother, reeeeeally don’t like the smell of raw ground beef, so I don’t cook with it a lot.

I decided to make an exception. And I bought the “extra-super-especially-lower-fat” kind (90/10) of ground beef, so I was able to endure like a martyr. But, let’s be honest here, the “extra-super-especially-lower-fat” kind is more expensive. And, if you’re a connoisseur, it’s less flavorful than the more fatty kind. A happy compromise is somewhere in the 85/15 region, but you be the judge.

Shepherd’s pie is a simple casserole made with a meat and vegetable base, topped with mashed potatoes and sometimes cheese (either as its own layer or mixed in with the potatoes). It is traditionally made with lamb. As in “Mary had a little.” Since ground lamb isn’t so common here in the states, we American-types tend to make ours with ground beef (which, is sometimes called cottage pie). It can have a combination of basically whatever vegetables you want–some people make it with carrots, corn, and green beans, others choose peas and carrots.–there are endless combinations.

I chose a simple combination that I recommend. Even if you are not a pea person, try throwing the peas in. You can’t taste them particularly and they add a lot of great vitamins with a hint of sweetness. You could throw in some green beans too, if you want. It’s a tasty way to fit in more veggies. See what you think! 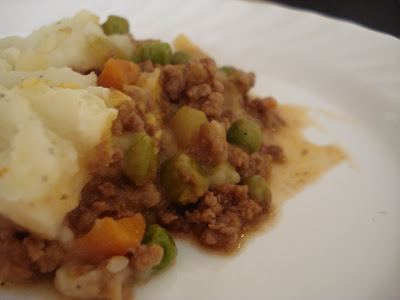 Directions:
In a large pot or your largest saucepan, cover potatoes with water. Bring to a boil and cook until they can be pierced very easily with a knife. Meanwhile, in a large skillet, brown the ground beef. Drain off any fat and set meat aside. Add onion, celery, and carrots to the skillet and cook about 5 minutes, or till onions become soft. Stir in tomato paste, beef broth, and ground beef. Cook and simmer till beef is cooked through. Liquid should be almost entirely evaporated/absorbed. Stir in 1 tbsp ketchup. If the mixture seems quite dry, add in 1 Tbsp more of either ketchup or tomato paste. Stir in frozen peas.

Meanwhile, drain potatoes and mash with butter, sour cream and enough milk to make a sturdy mashed potato (you don’t want them mushy or runny). Stir in salt and pepper to taste. Pour meat and veggie mixure into a 2qt baking dish (round or with an 11″ x 7″). If using cheese, sprinkle over veggie mixture. Top with mashed potatoes. Spread evenly over top and rough up surface with fork. 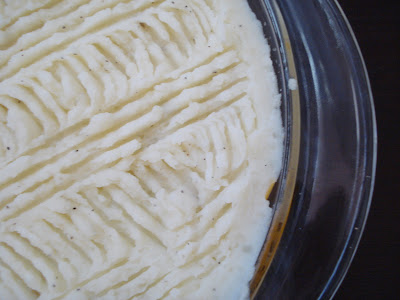 Place baking dish on a baking tray to prevent spills, and bake at 450 for 15 minutes or broil for a few minutes to brown up the top. Serve warm. It’s SUCH a cozy meal!