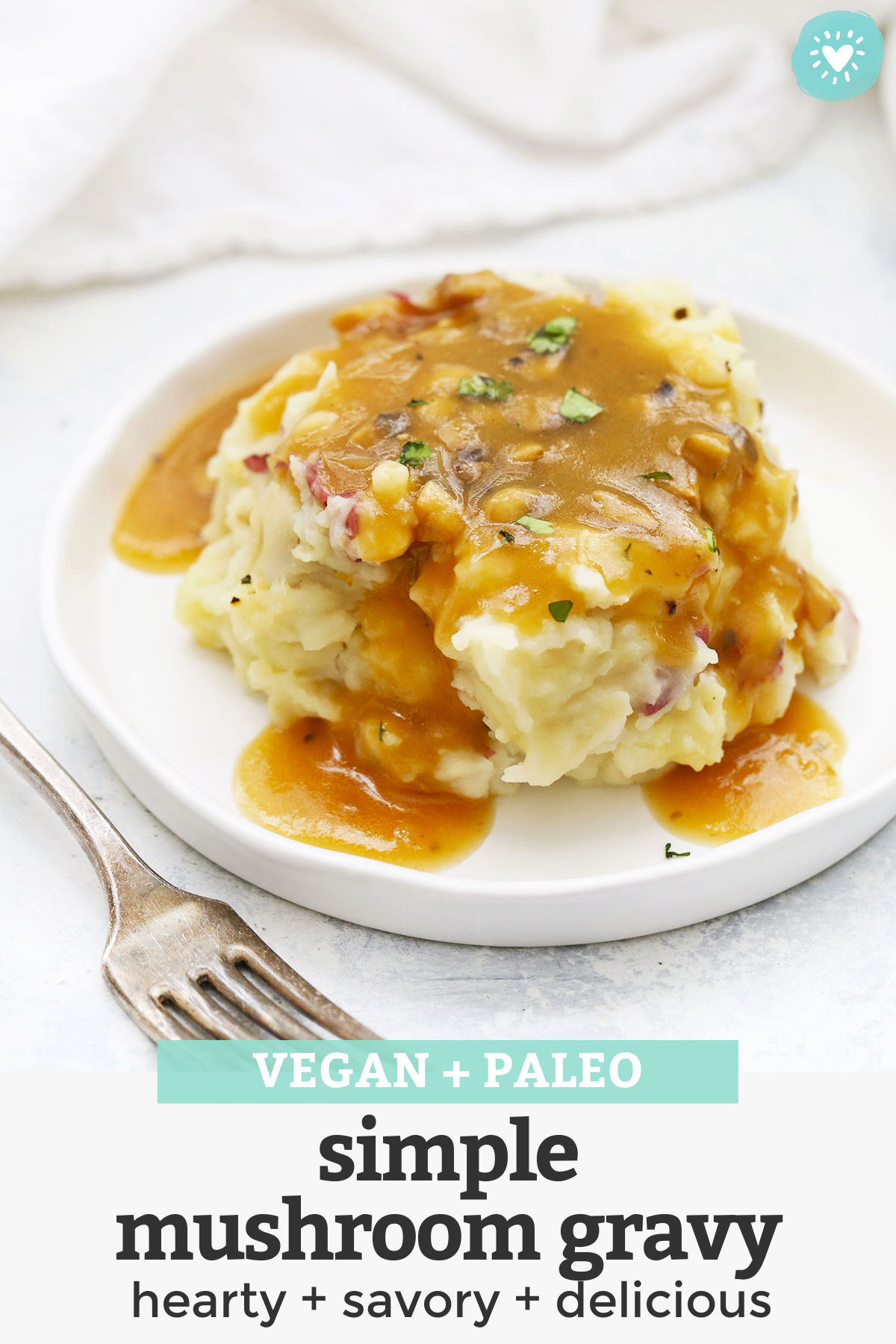 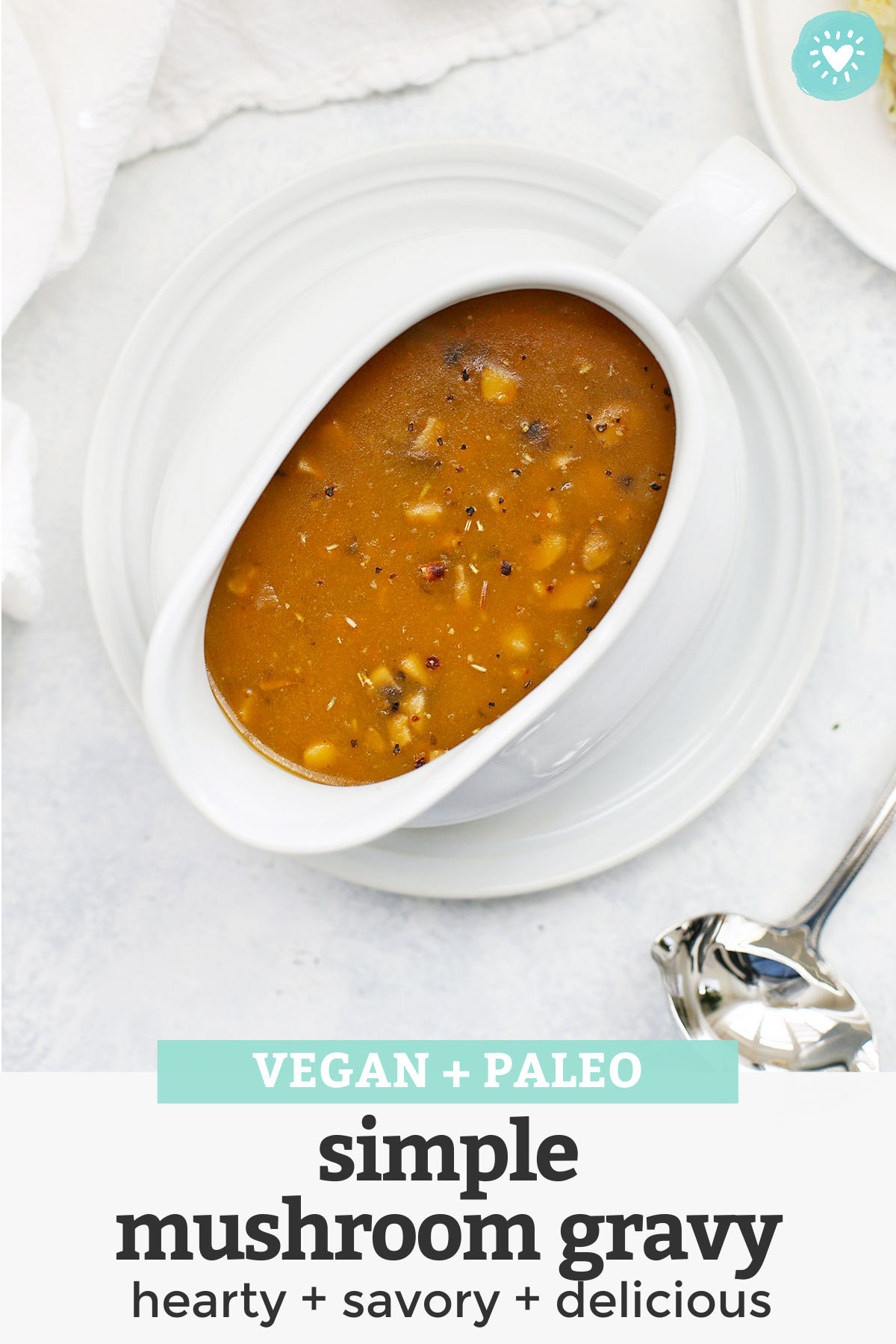 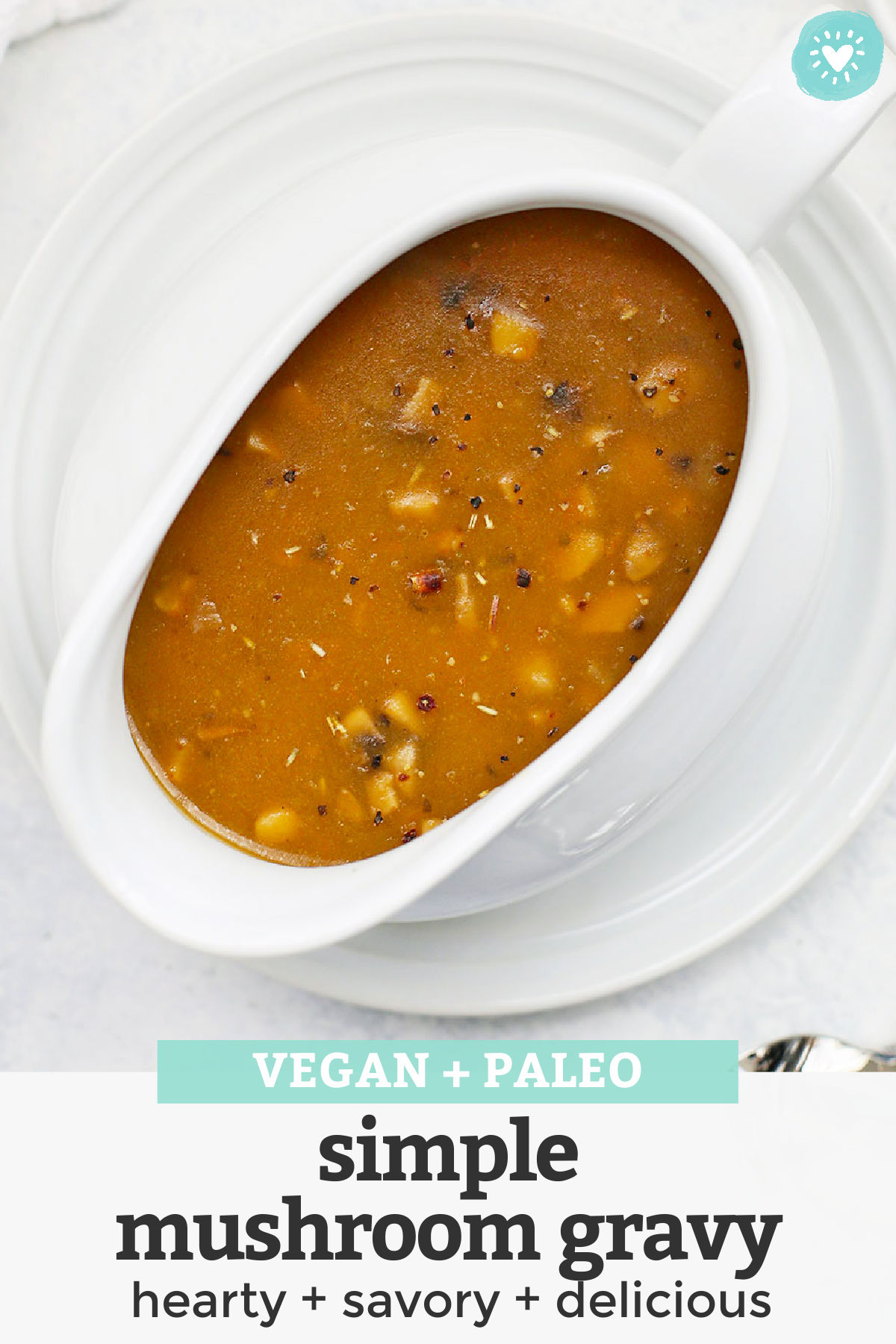 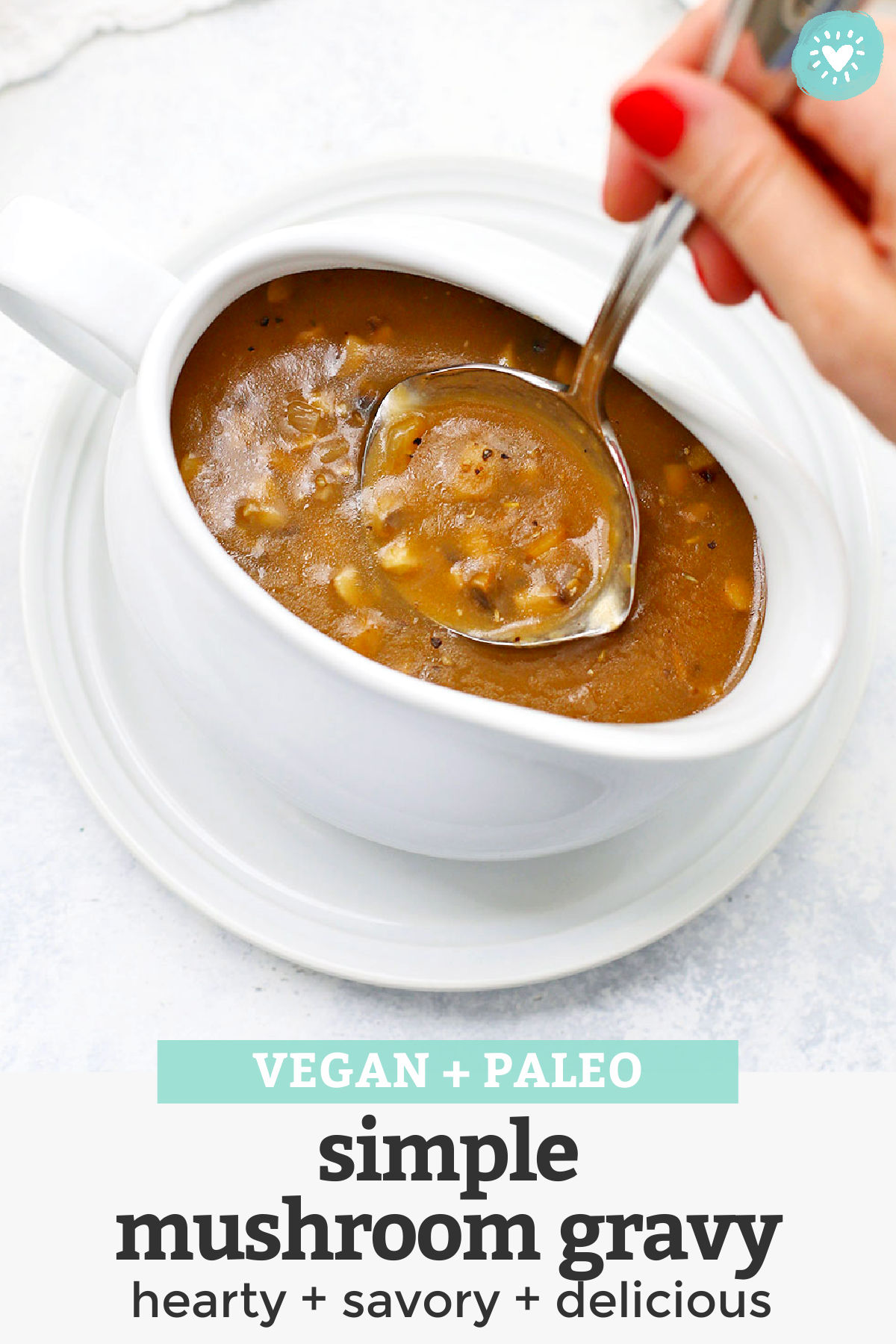 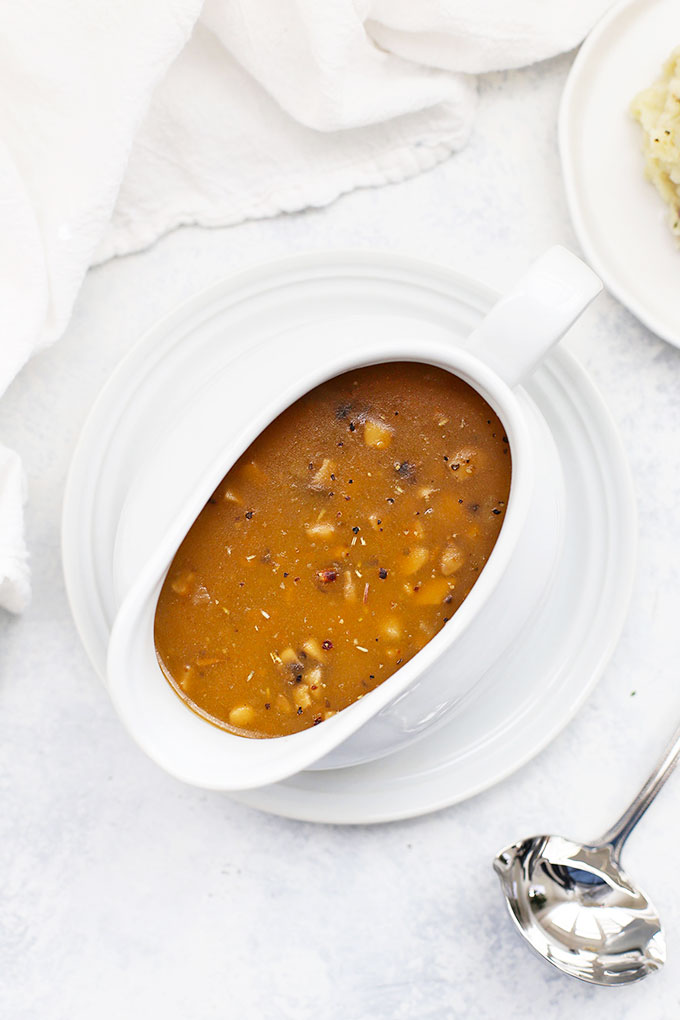 With so many different dietary needs around, it’s great to have a few options that work for everyone around the holidays. This simple mushroom gravy works for vegetarian, gluten-free, dairy-free, and paleo diets, so it’s a perfect recipe to keep on hand this time of year! 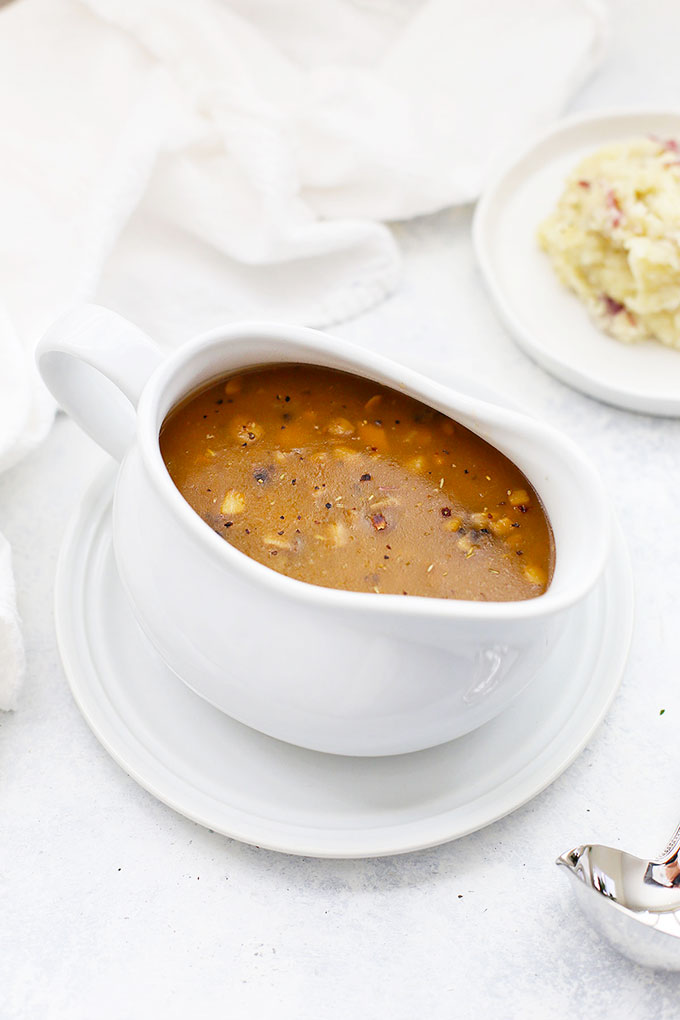 WHAT GOES INTO MUSHROOM GRAVY?

A LITTLE FAT. This mushroom gravy recipe is SUPER flexible, but each version starts with 2 Tbsp. of fat. You can use pan drippings (from a roast, chicken, beef, etc.), butter, ghee (clarified butter), or olive oil.

MINCED MUSHROOMS. You need about 4 oz. (1 1/2 cups minced) mushrooms to make mushroom gravy. I usually use white button or cremini mushrooms, but you can play with the flavor by trying/mixing different varieties.

A LITTLE BIT OF SHALLOT OR ONION + GARLIC. I love the flavor that shallot adds to mushroom gravy, but you can also use red or sweet onions instead. Garlic adds some depth and a richer flavor.

THICKENER. To thicken my mushroom gravy, I’ve tried flour (I use this gluten-free blend), cornstarch, and arrowroot. All three work beautifully, so you can pick your favorite. See the next section for more about each one!

BROTH. I’ve made this with vegetable broth (as pictured–this one is my favorite) and beef broth. It’s delicious both ways, so you can use whichever best meets your dietary needs. Do try to use a quality broth, as it adds quite a bit of flavor. (Homemade veggie broth or homemade beef broth is great if you have the time!)

SEASONINGS. The seasonings for this mushroom gravy are pretty simple and straightforward. I use a mix of salt, pepper, and a pinch of dried herbs. I like a pinch of dried sage and dried rosemary, but thyme is also lovely. Then, I round things out with…

A SECRET INGREDIENT FOR DEPTH. The “secret” ingredient in my mushroom gravy recipe is gluten-free tamari! It adds some saltiness, but also a bit of umami, which is fantastic with the mushrooms. (You can also use low-sodium soy sauce or coconut aminos, depending on your dietary needs) 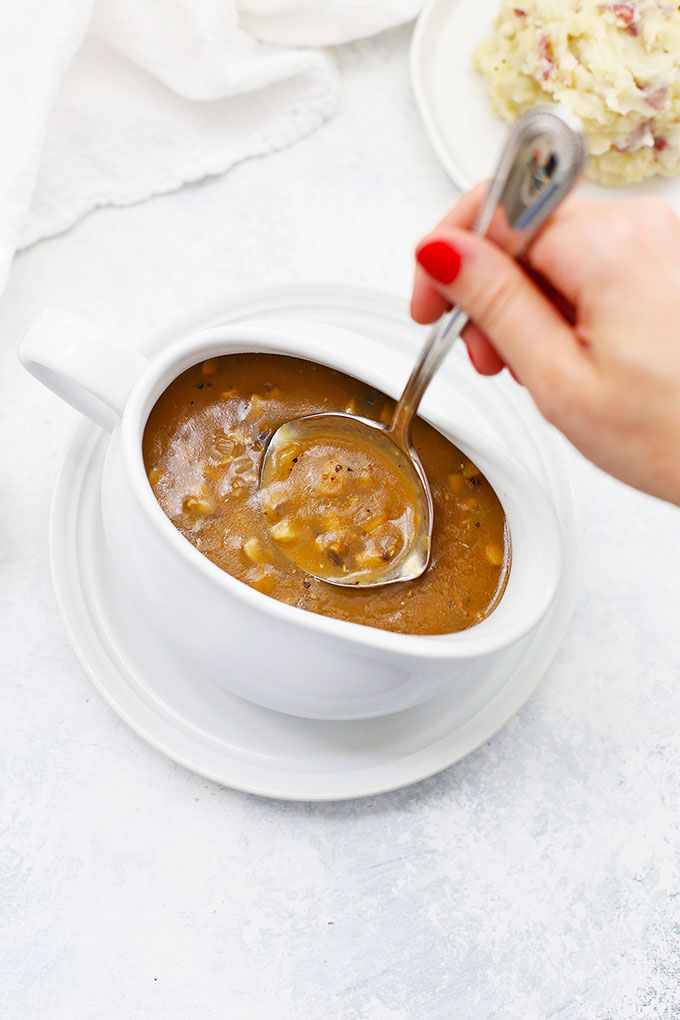 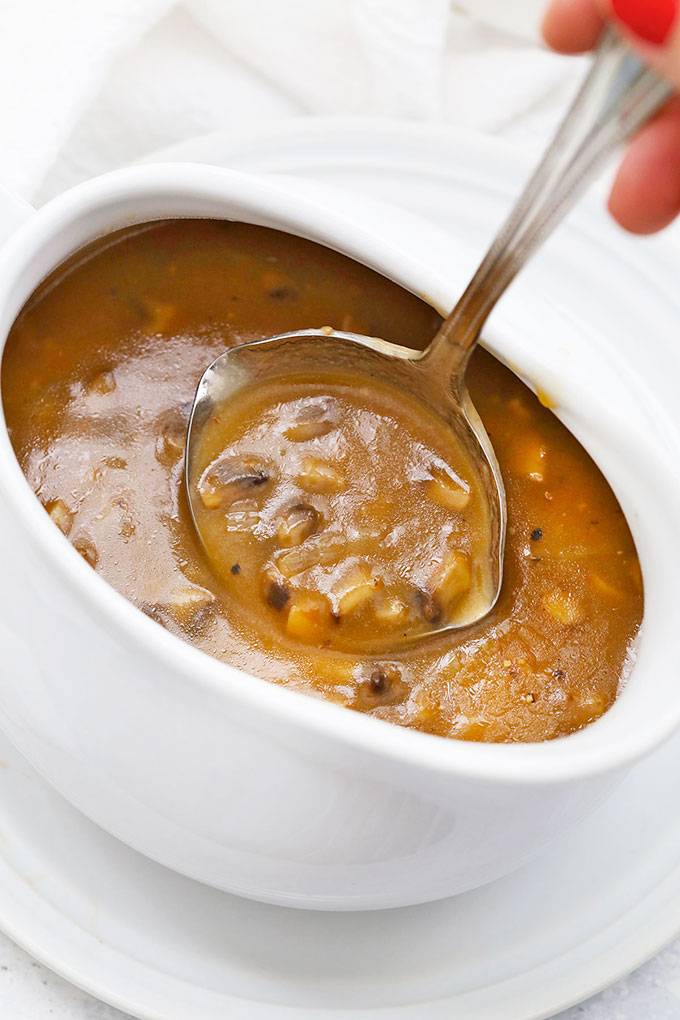 LET’S TALK THICKENER! HOW TO USE CORNSTARCH, ARROWROOT, OR FLOUR TO THICKEN GRAVY.

You can use cornstarch, arrowroot, or flour to thicken your mushroom gravy. Each one will work, though they work slightly differently. Feel free to use whichever you have on hand or whichever works for your dietary needs!

FLOUR (& GLUTEN FREE FLOUR) – Flour is a common gravy thickener. It basically acts like a roux when combined with the fat in the gravy and produces a thick, rich gravy that’s got a slightly cloudy appearance. We’re gluten-free, so we use this gluten-free flour blend when we thicken our mushroom gravy with flour.

CORNSTARCH – Cornstarch thickens and produces a slightly clearer gravy than flour. It has more thickening power than flour (since it’s 100% starch) but can also get a bit gelatinous when chilled. When re-heated, it can be slightly thinner than a flour thickened gravy.

ARROWROOT – Arrowroot has similar results and properties to cornstarch but provides a grain-free option for paleo eaters, gluten-free eaters, and those who avoid corn. Thickens quickly, but can also lose its thickening power if you over-cook it (i.e. long boiling instead of a lower, slower simmer.) 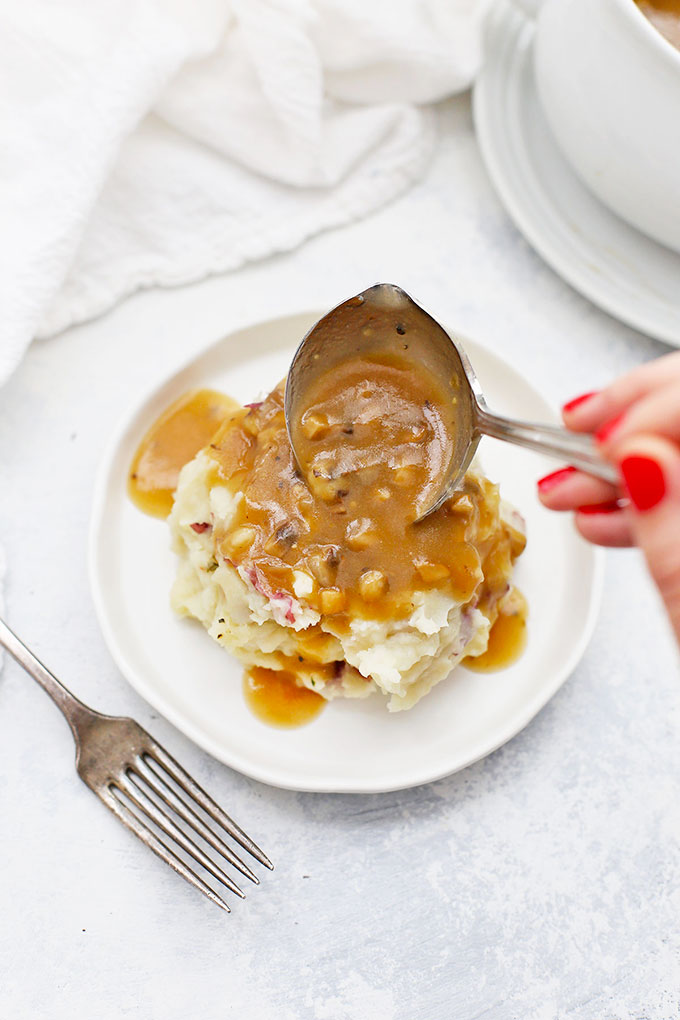 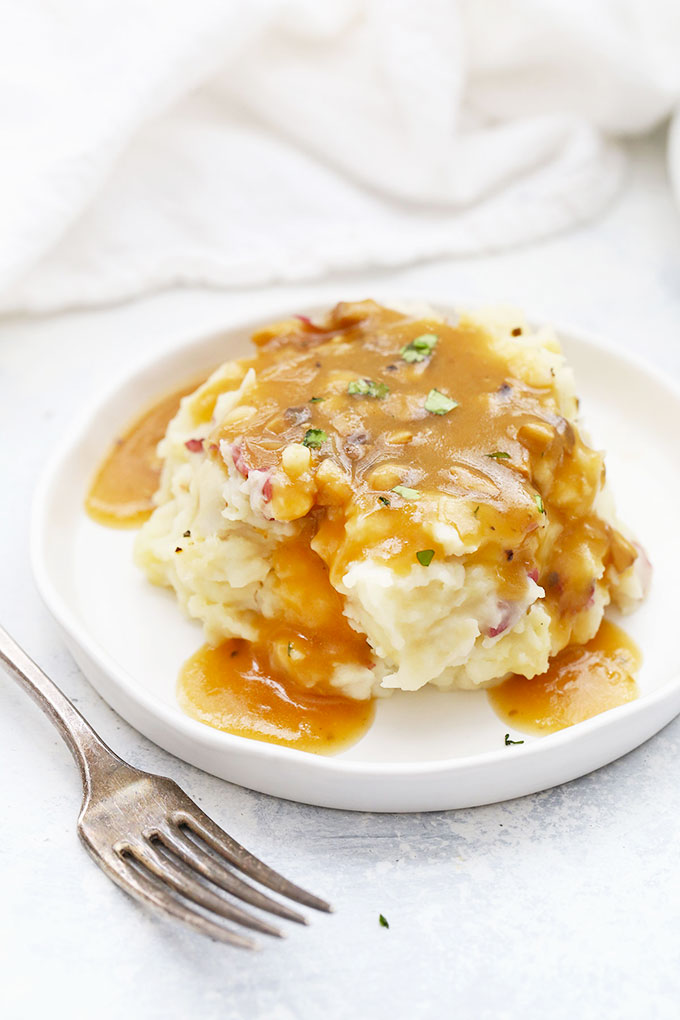 WATCH THAT SODIUM. Gravy can easily get too salty if you’re not careful. I prefer using low-sodium broth in my mushroom gravy so I can control the sodium a bit better. Similarly, using low-sodium tamari (or soy sauce), or using coconut aminos will help you keep an eye on the sodium content.

PALEO? READ THIS! For a paleo mushroom gravy, you’ll want to use:

VEGAN? READ THIS! For a vegan mushroom gravy, you’ll want to stick with vegan butter or olive oil for the fat and be sure to use vegetable broth. All other ingredients are vegan-friendly!

WHAT KIND OF MUSHROOMS DO YOU USE FOR MUSHROOM GRAVY? I make mine using white button mushrooms or cremini mushrooms, but you can play around with this a bit if you’ve got other varieties you’d like to try!

CAN YOU MAKE MUSHROOM GRAVY IN ADVANCE? Mushroom gravy is at its best when it’s fairly fresh, but it can be made a day in advance if needed.

HOW TO REHEAT MUSHROOM GRAVY. You’ll want to reheat your mushroom gravy gently over low or medium-low heat to preserve the thickening. If you boil it over high heat, you may actually break the binding power of cornstarch or arrowroot. (If this happens, you can mix 1 Tbsp. cornstarch/arrowroot with 1 Tbsp. water and stir it into the gravy. Stir until it thickens back up. Repeat, if needed.)

NEED A GRAVY BOAT? I love this one. It pours well and comes with a plate to catch drips. I use this mini ladle with it to spoon gravy over potatoes. (It’s perfect for making a little “well” to catch the gravy!)

*IF USING CORNSTARCH OR ARROWROOT INSTEAD OF FLOUR: