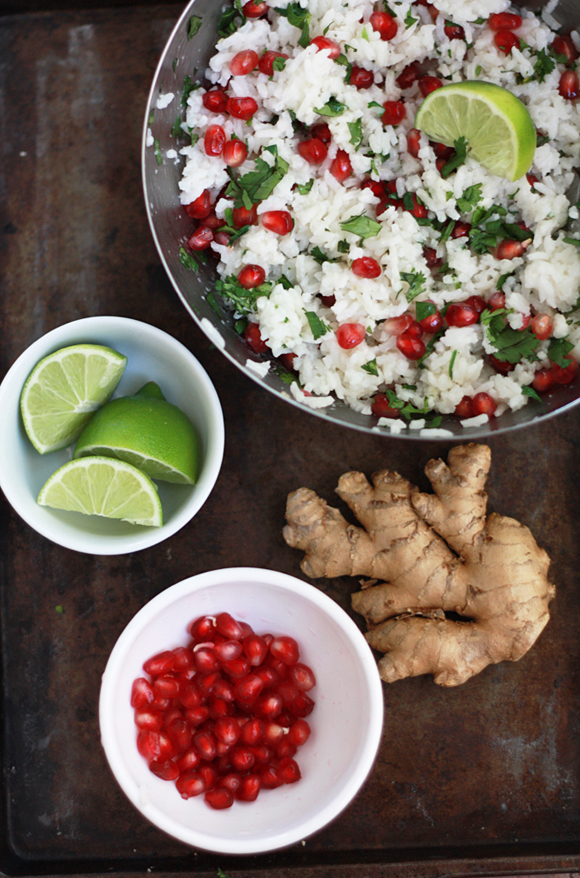 Happy Monday, friends! How are your New Year’s resolutions going? We’re 90% done with our next adventure list. I can’t wait to share it when it’s done. In the meantime, we’ve been enjoying some downtime together as a family. Sophie’s back to school tomorrow and Michael starts up again next week, so the break is officially coming to a close *sigh.*

We’ve had some fun recipe testing during the break and have come up with some really yummy things to share! 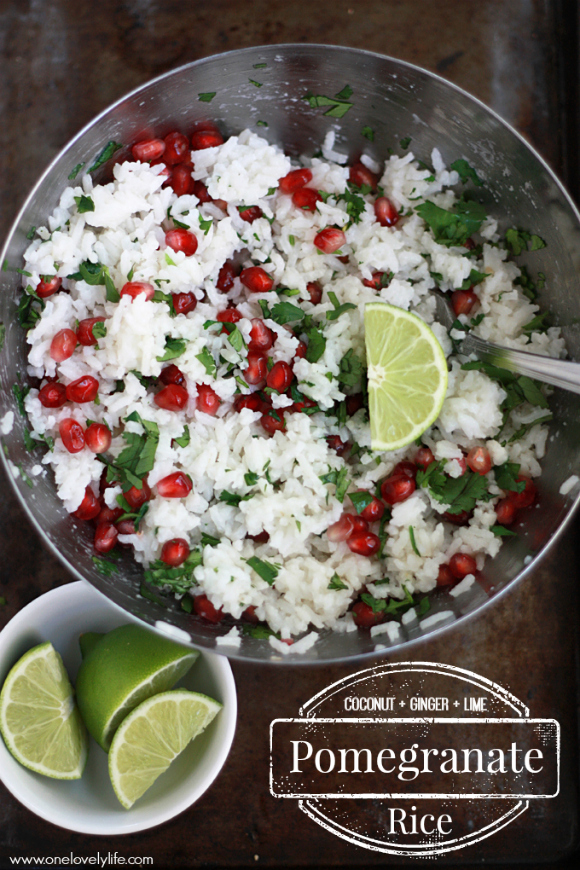 First up is this pomegranate rice. It’s simple yet full of flavor. It’s one of my favorite applications for pomegranate yet! We saw this gorgeous pomegranate rice on Half Baked Harvest a while back, and I’d been dying to try something like it. I adapted my recipe for coconut ginger rice, and we’ve got this recipe right where we want it.

The creaminess of the coconut milk is fantastic, and the fresh cilantro and pomegranate keep things nice and bright. It’s delicious on its own, of course, but we love it best paired with a good curry. It’s unbelievable paired with curry. (I can’t wait to share that recipe later this week.)

And now for the million dollar question…

“Aren’t you guys trying to eat healthy? Why do you eat white rice instead of brown?”

I’ve gotten this question a lot recently (especially for recipes like our One Pot Coconut Chicken and Rice), so I thought I’d take a minute to answer it for anyone wondering. 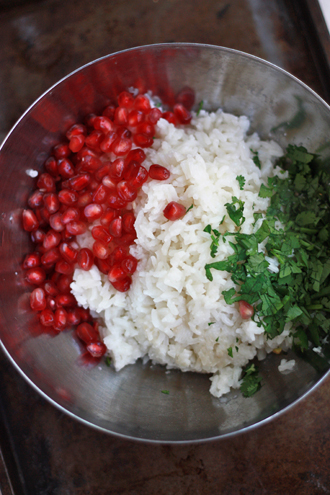 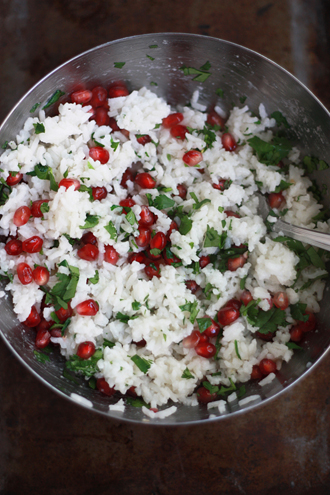 If you’re wondering about why we eat white rice instead of brown, it’s something we’re still learning about. Rice is one grain that continues to test high in arsenic (especially rice grown in the South). Many gluten free bread/pasta/baking products rely on rice and rice flour to act as a wheat substitute, so if you’re eating much rice, let alone pasta, baked goods, crackers, or breads made with rice flour, your exposure to arsenic is going to be higher than it would be otherwise. Brown rice can carry extra levels of arsenic (as well as phytic acid) in the bran layer, which is removed when polishing it into white rice.

Because we eat gluten free and so many options include rice in some form, we try to take a few measures to reduce our exposure. Rinsing rice till the water runs clear before cooking with it can remove about 30% of the arsenic. We’re also choosing more recipes for grain-free products (that use coconut flour and almond or other nut flours), and limit our bread/rice-flour products to 1-2 per day. That’s still a bit higher than I’d like, but I’m still learning about gluten and grain free baking, so it’s a process. And as far as fiber goes, I eat fruit and vegetables at every meal (including breakfast), and have generally gotten my daily fiber intake from fruits and veggies before dinnertime.

We’ve been using Lundberg brand white rice (grown in California) for most of our cooking, which tested lower in arsenic than most other brands (according to Consumer Reports). They don’t know (or care) who we are, but if anyone else is trying to make this decision, I thought I’d pass along what’s been helpful to us. They have a lot of good information on their site about arsenic, as well as some testing and FDA information regarding the issue.

I feel I should also note that I’m not feeling alarmist or extremist about this issue. If we weren’t a gluten free family, I probably wouldn’t worry too much about it, since we otherwise would only eat rice or a rice flour product 1-2 times per week before going gluten free. Since we are gluten free, and rice flour seems to be everywhere when you’re looking for things like pretzel sticks or bread, it’s something I’m thinking about. Do I feel afraid of brown rice? Nope. Do I think white rice is the best choice for everyone? Nope. Arsenic is also found in things like veggies and drinking water, and I’ve got nothing against those. There are very few foods out there without any negative effects whatsoever. I’m just passing along why we’ve decided not to worry about eating white rice.

A few other posts about white rice: 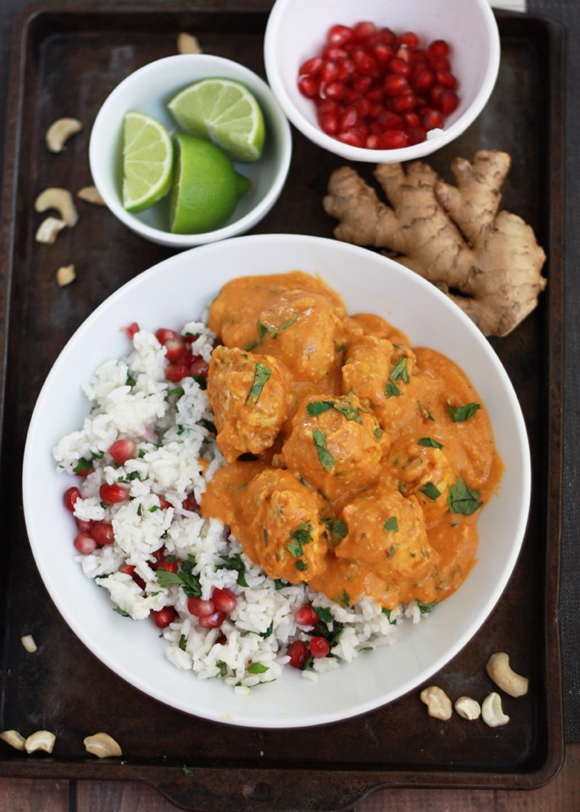 Yes, this is a lot of cilantro. If you’re nervous, feel free to start small and add to it!