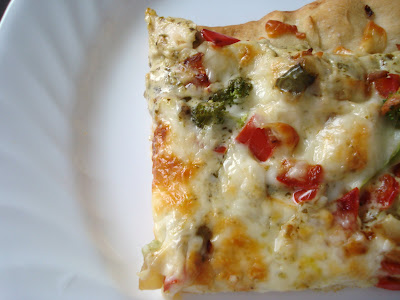 There are few things that work better for a Friday night date with your husband and old movies than homemade pizza.

I was inspired to make this pizza by my sister Elisabeth, whose husband lets her make it with artichoke hearts. When I asked her for the recipe, these were her directions “spread a sinful mixture of alfredo sauce and pesto sauce…Sprinkle cooked and shredded or cubed chicken, tomatoes, artichokes if your husband lets you, and lots of mozzarella cheese. That’s it.”

Well, my husband isn’t an artichoke heart guy and he doesn’t love tomatoes on pizza…so I could keep the alfredo, pesto, and chicken. And as yummy as all of those things are…they just wouldn’t cut it by themselves on a pizza. So, I had to improvise.

Instead of tomatoes, I used caramelized bell peppers and onions, and instead of artichoke hearts, I used broccoli. And boy howdy was it delicious. And it was a perfect dinner for snuggling in lots of blankets while we watched Jimmy Stewart in “Mr. Smith Goes to Washington.”

OH! I almost forgot! If possible, use a thin, crispy crust. I used half of my best pizza crust recipe and spread it thin. It’s just so much better texture-wise with the alfredo sauce. A soft, puffy crust has the potential to get soggy. Ew. 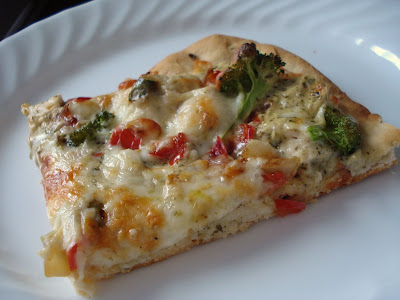 Meanwhile, in a small saucepan, heat alfredo sauce and pesto together and stir to combine. Remove from heat.

In a medium skillet, saute onion and bell peppers in a tsp of olive oil over medium heat until peppers begin to brown around the edges and onion begins to caramelize. Salt and pepper to taste.

Bake at 450 degrees about 20-25 minutes or until cheese is bubbly and golden.