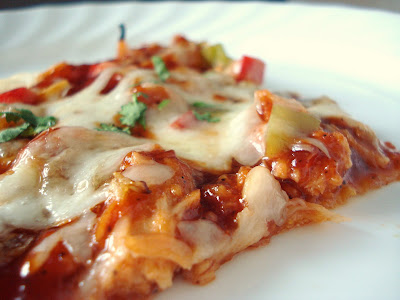 For anyone that doesn’t read cookbooks like novels in their spare time…or their not spare time (cough), Peter Reinhart is considered a definitive resource when it comes to bread baking. I’ve read several of his (rather thick) books, and they are fantastic!

What makes his technique different than anyone else’s that I’ve read is that most of his recipes take more than one day to make. He uses a slow-developing yeast technique that typically takes at least two days. The first day, he often develops a “sponge” for his dough, then the next day (or so), he uses the sponge to develop the full bread dough. It’s very interesting.

This month’s Daring Baker’s challenge was to make Reinhart’s pizza crust dough, which, like most of his breads, takes at least two days to make. The other part of our challenge was to take pictures of ourselves tossing the dough.

I’m not a tosser. I don’t toss. Not that I dont’ want to be a tosser…it’s just that my hand-eye coordination skills are roughly zero. So, don’t laugh, but for my challenge to count, I have to post the picture. It was in bad lighting, when I was wearing workout clothes after a reeeeally long day. Forgive me. 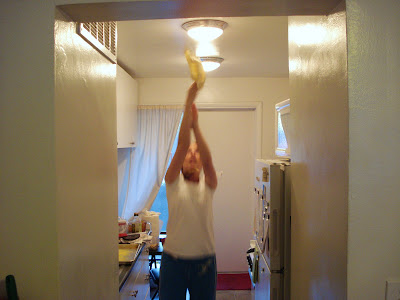 After the two-day time commitment, I was really expecting something special. The gluten-rich dough was easier to toss than I thought it would be, and it felt different from other crust doughs in my hand, but–truth be told–I don’t think I’ll ever make it again. It was okay, but really not all that great.

What WAS great was the toppings. Use any crust recipe you like here and give barbecue chicken pizza a try! 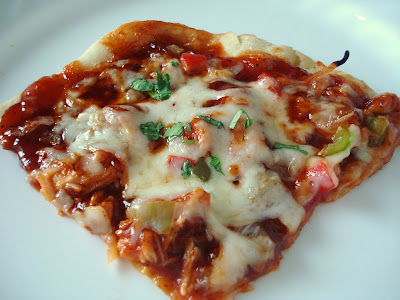 Directions:
In a medium saucepan, caramelize onion in 1-2tsp olive oil over medium heat until golden and sweet. Roll out pizza crust. Stir chicken into barbeque sauce. Top crust with barbecue sauce/chicken mixture, onion, toppings of choice, and grated cheese. Bake at 400-500 degrees (as hot as you can get) for about 10-12 minutes or till bubbly and golden.

*I prefer to pre-bake my crust halfway before topping it. I never end up with soggy crust.