Cinnamon Churro Popcorn – This easy cinnamon popcorn almost tastes like biting into a warm churro or cinnamon roll. It’s a simple, delicious treat you can whip up in no time! (Gluten free & vegan friendly) 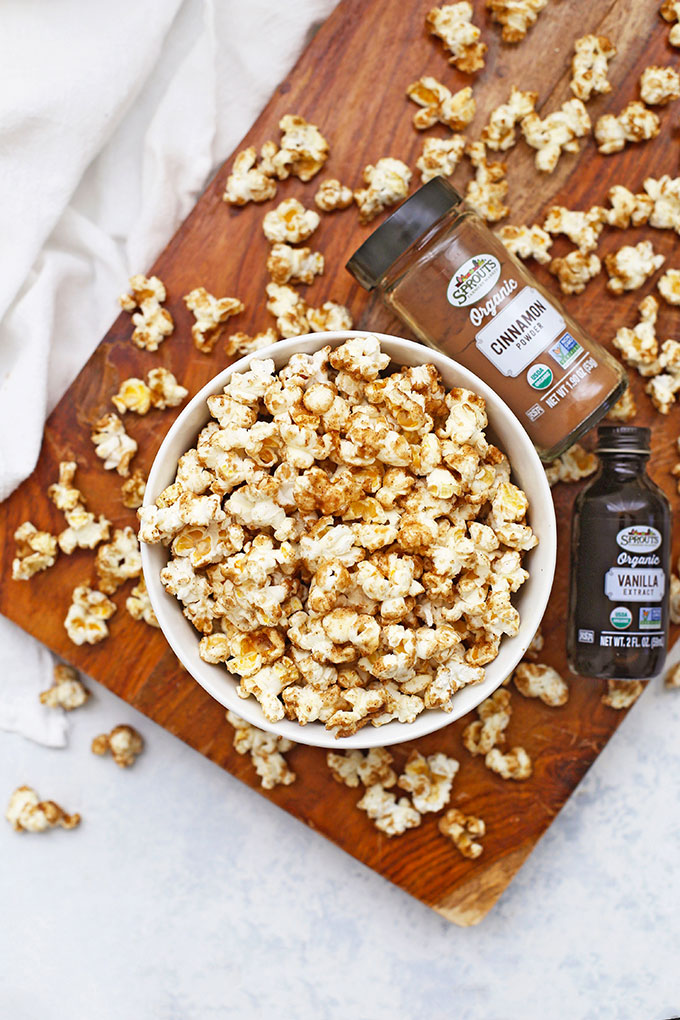 This post is written in partnership with Sprouts. All opinions are my own.

One of the things I hope for as my kids grow up is that they have lots of memories of being happy at home. 3/4 of us are MEGA introverts, so we love being home and cozy. While they’re small, we look for little excuses to make the simple things fun, whether that’s turning lunch into a picnic on the floor, celebrating obscure holidays (National Chocolate Chip Cookie day, for instance), or making the most of movie or game nights by adding a little treat to go with them.

One of our go-to treats is popcorn because it’s one of those easy, always ready to go snacks you can make in no time. Popcorn kernels are ready in just a few minutes, and there are so many tasty ways to flavor it that you’ll never run out of options.

This Cinnamon Churro Popcorn is our latest favorite and guys? It’s GOOOOOOD. Also easy. Did I mention easy? Because… 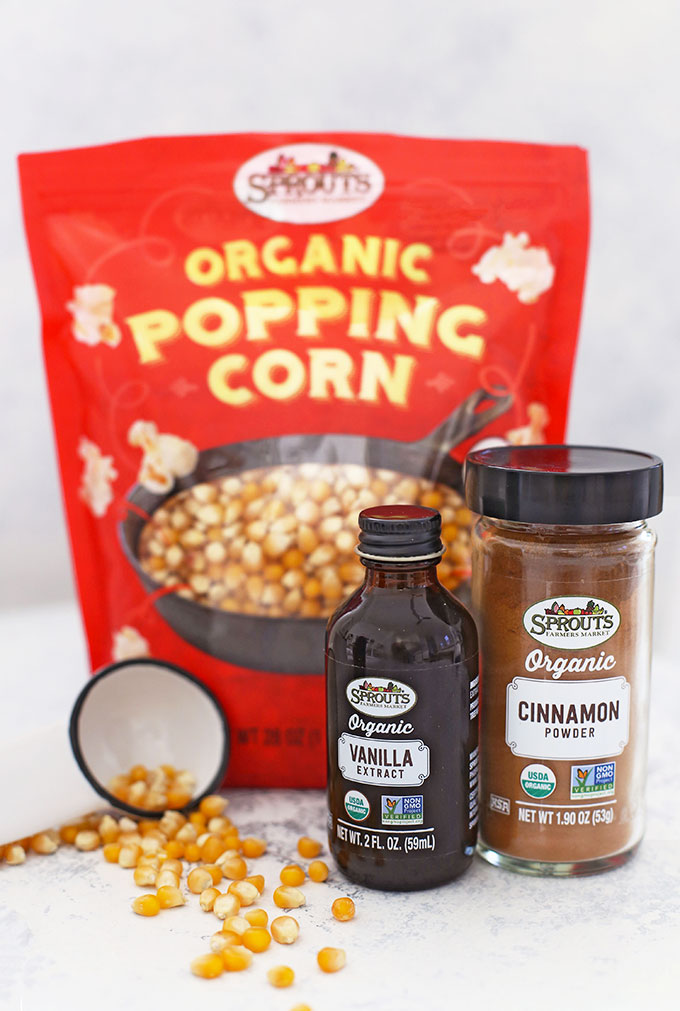 What You Need to Make Cinnamon Popcorn (Key Ingredients):

1. Popcorn Kernels. You can’t make cinnamon churro popcorn without, well, popcorn. You can use plan (not buttered) microwavable popcorn if you like for this recipe, but I love picking up popcorn kernels bagged on the shelves or in the bulk bins at Sprouts when they’re on sale. The great price and awesome quality make it my go-to choice. I keep popcorn kernels on hand so I can flavor it any way I like. And don’t worry about popping it–I’ll walk you through my 2-minute-per-batch method of popping corn below in the recipe. It’s EASY!

3. Coconut Sugar – I use coconut sugar because it’s my go-to granulated sugar. It’s thought to have less of an impact on blood sugar, and the taste is delicious and caramel-y. (It’s made from coconut blossom nectar not coconuts themselves, so it doesn’t taste like coconut the way coconut oil does.) See the next section for swaps if you prefer to use something else.

4. Cinnamon & Vanilla – Here’s where all that yummy cinnamon and churro flavor comes from. The combination lends another note of sweetness and tastes like a warm churro or gooey cinnamon roll. It’s AMAZING. 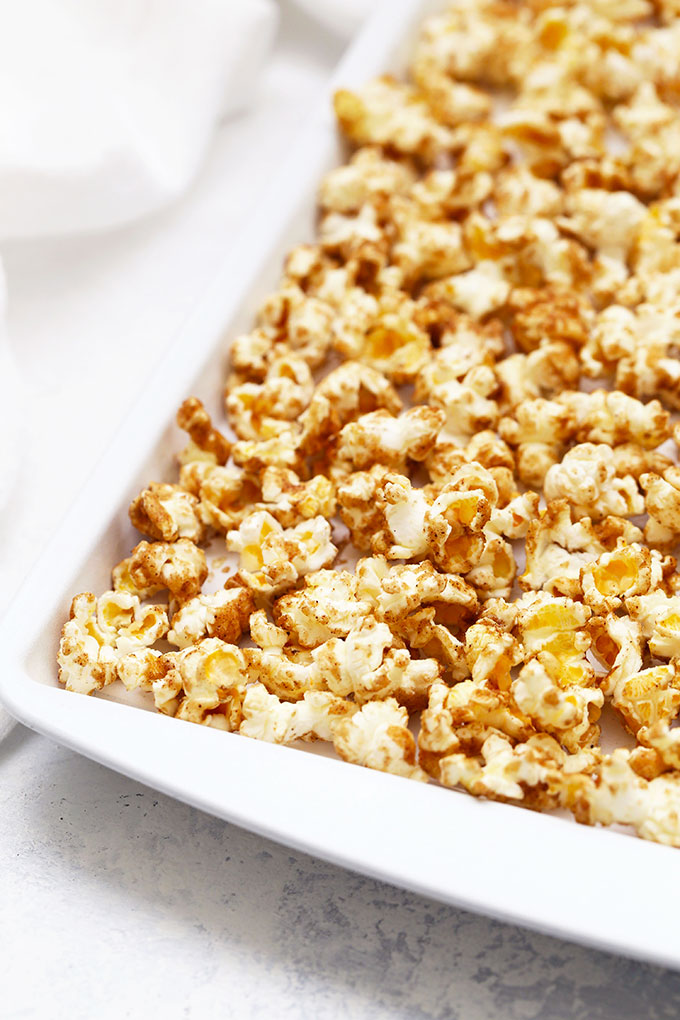 Variations & Substitutions for this Cinnamon Popcorn 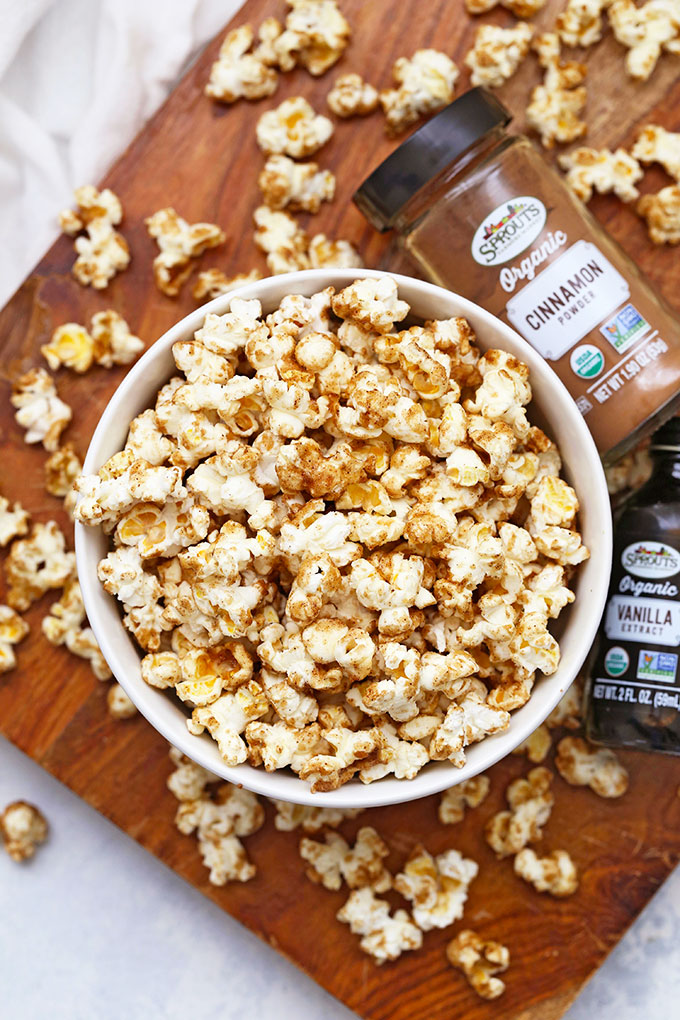 Can I make this with ghee or coconut oil? In my experience, the ghee didn’t combine with the sugar properly and coconut oil tasted pretty coconutty. It wasn’t bad, but it didn’t taste like a cinnamon churro (which was what I was going for).

Do you use regular paper bags to pop the popcorn? Yep! Just standard paper lunch bags. No added chemicals or protectants needed! You can pick some up on your weekly Sprouts run!

How do I pop popcorn without a microwave? No problem! You can totally use this stovetop tutorial or even this Instant Pot tutorial if you don’t like using a microwave or don’t have one.

Cinnamon Churro Popcorn – This easy cinnamon popcorn almost tastes like biting into a warm churro or cinnamon roll. It’s a simple, delicious treat you can whip up in no time! (Gluten free & vegan friendly)