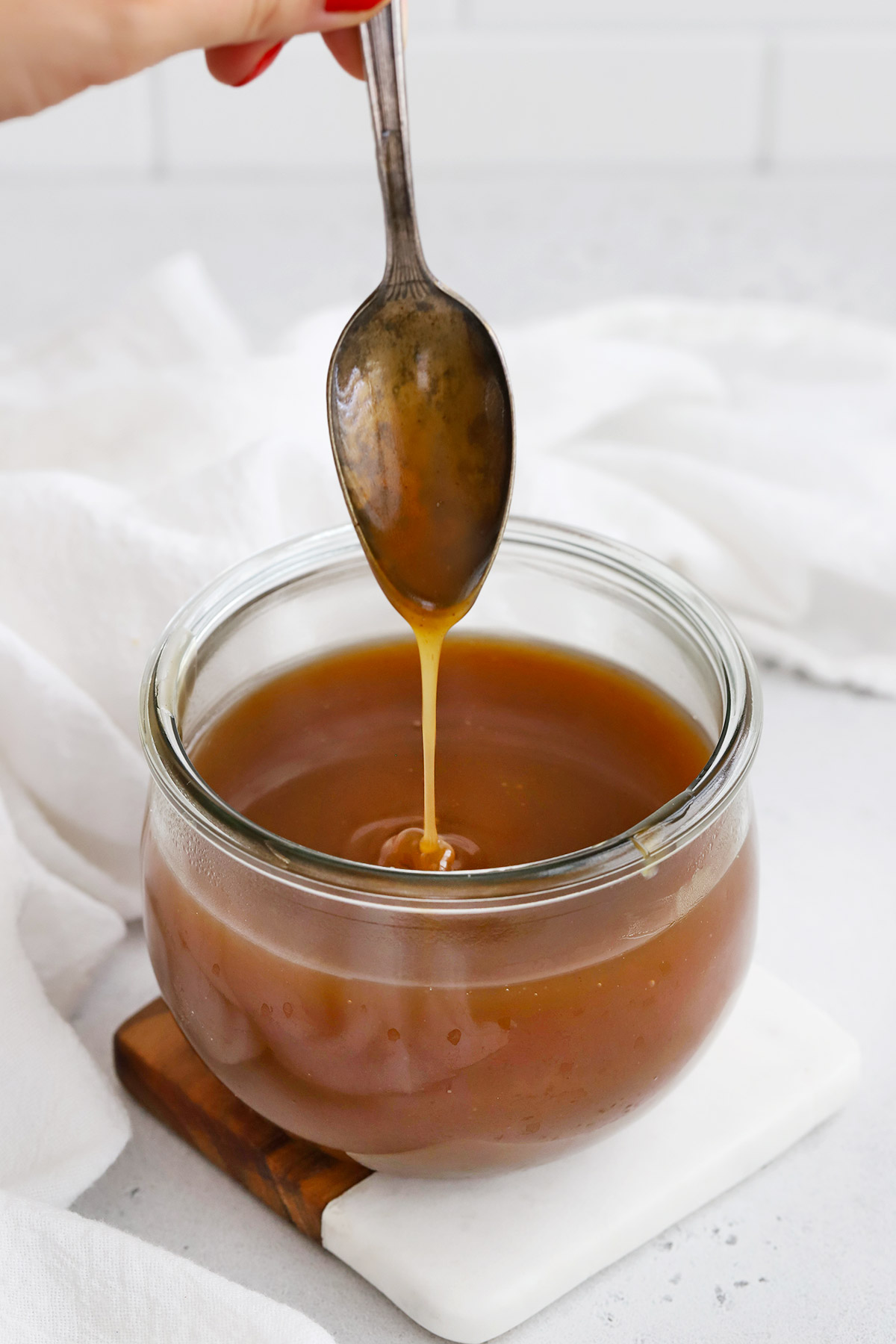 This is a quick caramel, so there won’t be any need for candy thermometers, carefully caramelized sugar, etc. It’s just as simple as measuring and whisking!

You only need a few ingredients and a few minutes to put this cider caramel sauce together. Then, it’s just a matter of what to put it on… 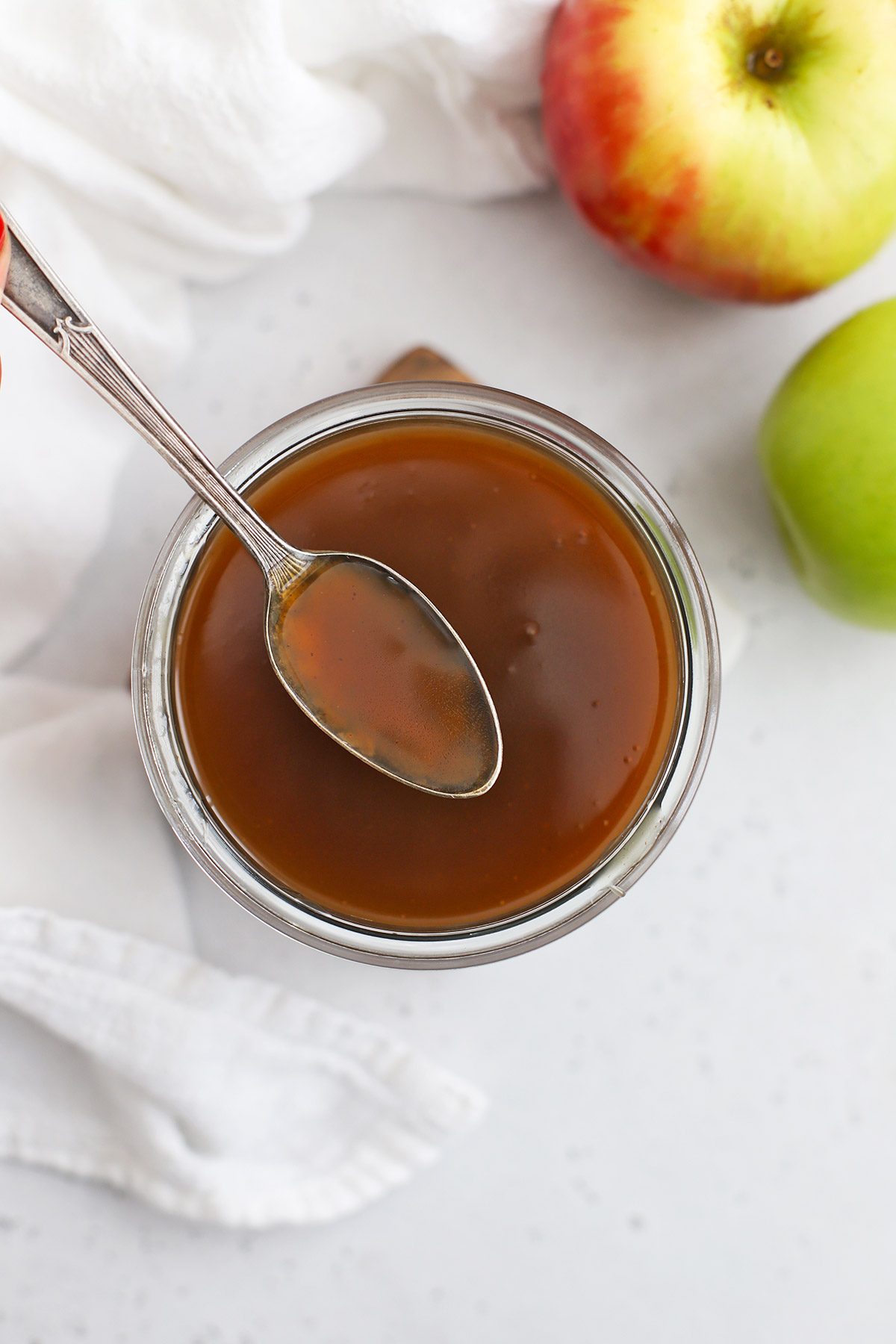 HERE’S WHAT GOES INTO THIS APPLE CIDER CARAMEL SAUCE:

CORNSTARCH. A little cornstarch is kind of the secret to this recipe. A few tablespoons help everything thicken up into a glossy, gorgeous caramel sauce that drizzles beautifully. (You could probably use arrowroot if you avoid cornstarch.)

BROWN SUGAR. Most of the caramel notes in this cider caramel sauce come from brown sugar. It’ll add a nice, deep color, but also the caramel-y notes from the molasses in the brown sugar. SO GOOD.

BUTTER OR VEGAN BUTTER. Then, to finish up the caramel notes, you’ll add some butter or vegan butter, depending on your dietary needs. It helps thicken the caramel sauce and give it a little body, so I don’t recommend skipping it!

CINNAMON + A PINCH OF SALT. A little bit of cinnamon and a tiny pinch of salt really play up the apple and caramel flavors in my cider caramel sauce. SO GOOD.

VANILLA. And lastly, adding a splash of vanilla ties everything together and makes this recipe complete! 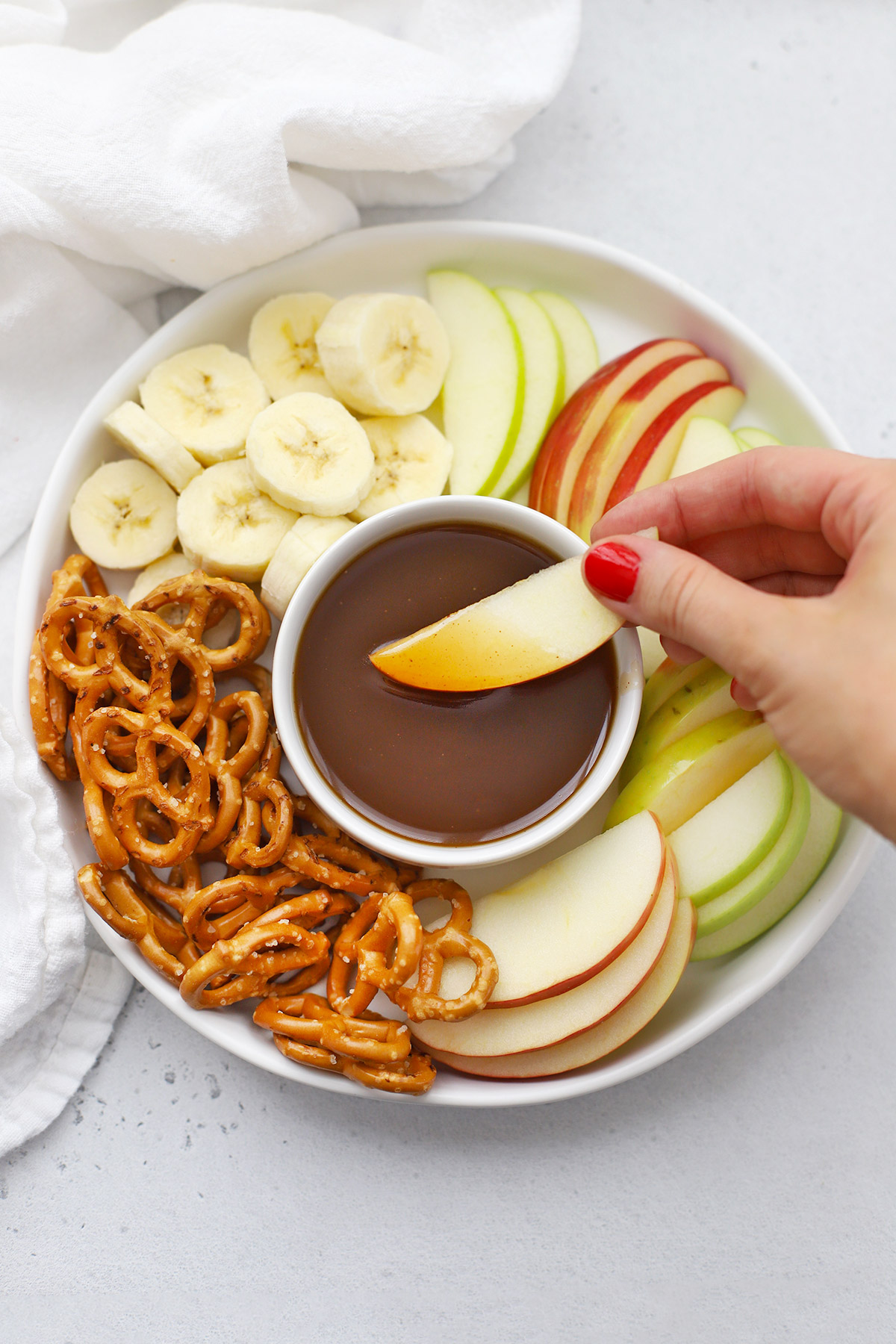 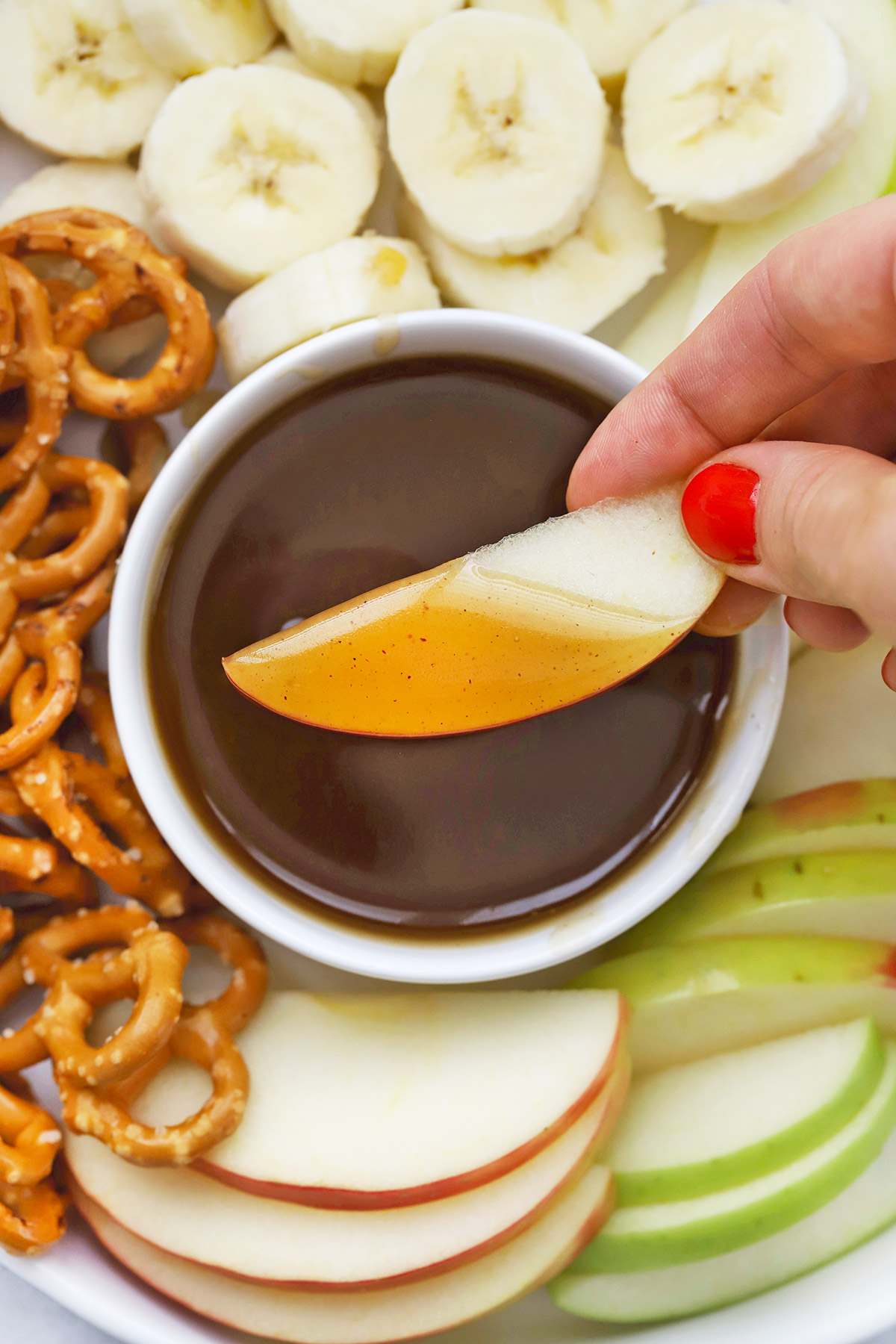 HOW TO USE APPLE CIDER CARAMEL SAUCE. (SPOILER: IT’S GOOD ON EVERYTHING.)

POUR IT OVER ICE CREAM. A scoop of vanilla, caramel, or snickerdoodle ice cream with this apple cider caramel sauce drizzled on top is heaven in a bowl. Just saying.

SPOON OVER CAKE. My favorite is Apple Spice Cake, but you could certainly drizzle this over pumpkin cheesecake, pumpkin cake, and more. Anything with warm spices, apple, or pumpkin is especially delicious!

DRIZZLE OVER APPLE CRISP. Take your apple crisp to the next level by drizzling it with cider caramel sauce! It’s mind-blowing. This gluten-free apple crisp is our FAVORITE.

USE AS A DIP WITH SLICED APPLES. Pour this cider caramel into a pretty bowl and use as a dip for sliced apples, pears, graham crackers, and more! Or, drizzle it over a plate of Apple Nachos! 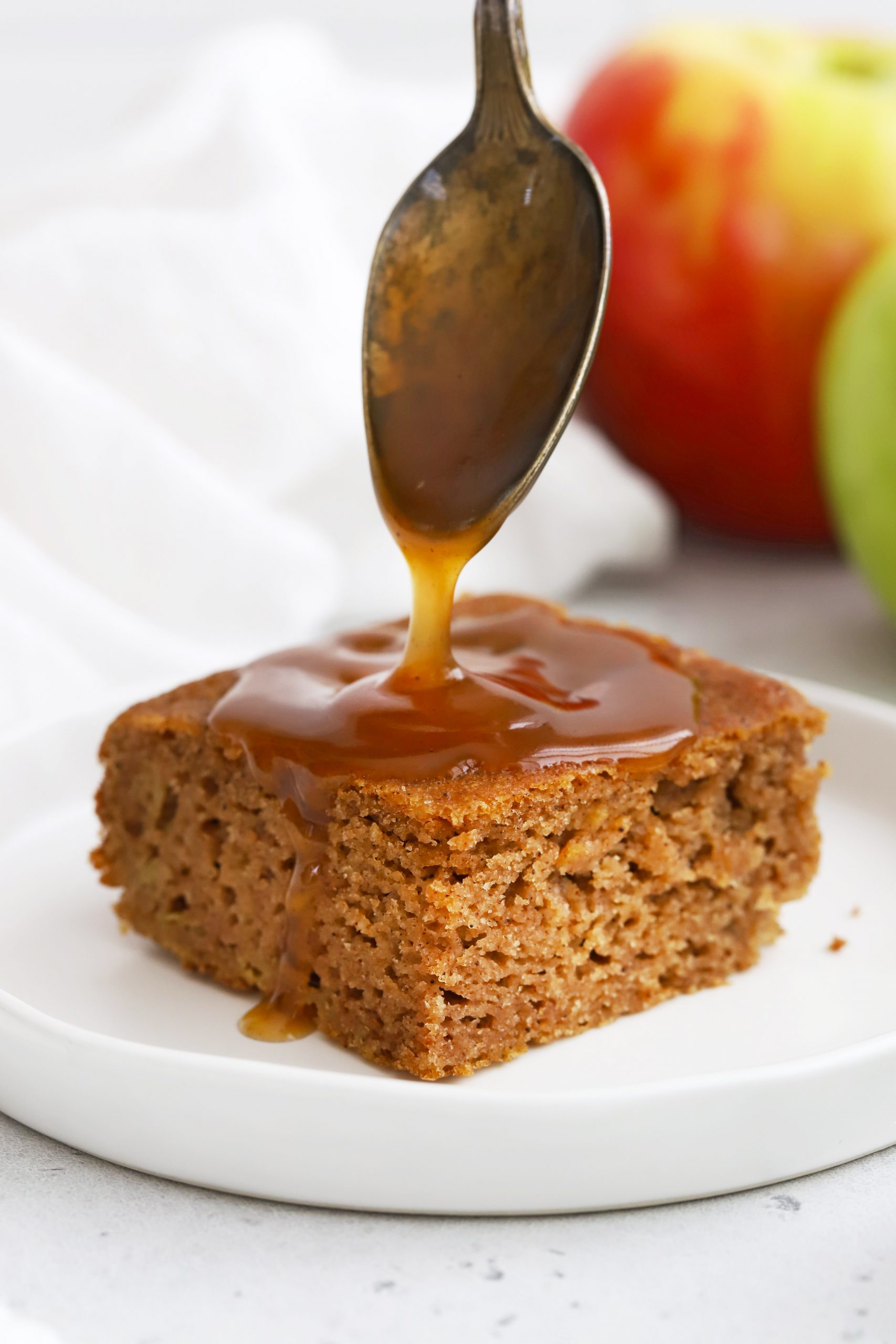 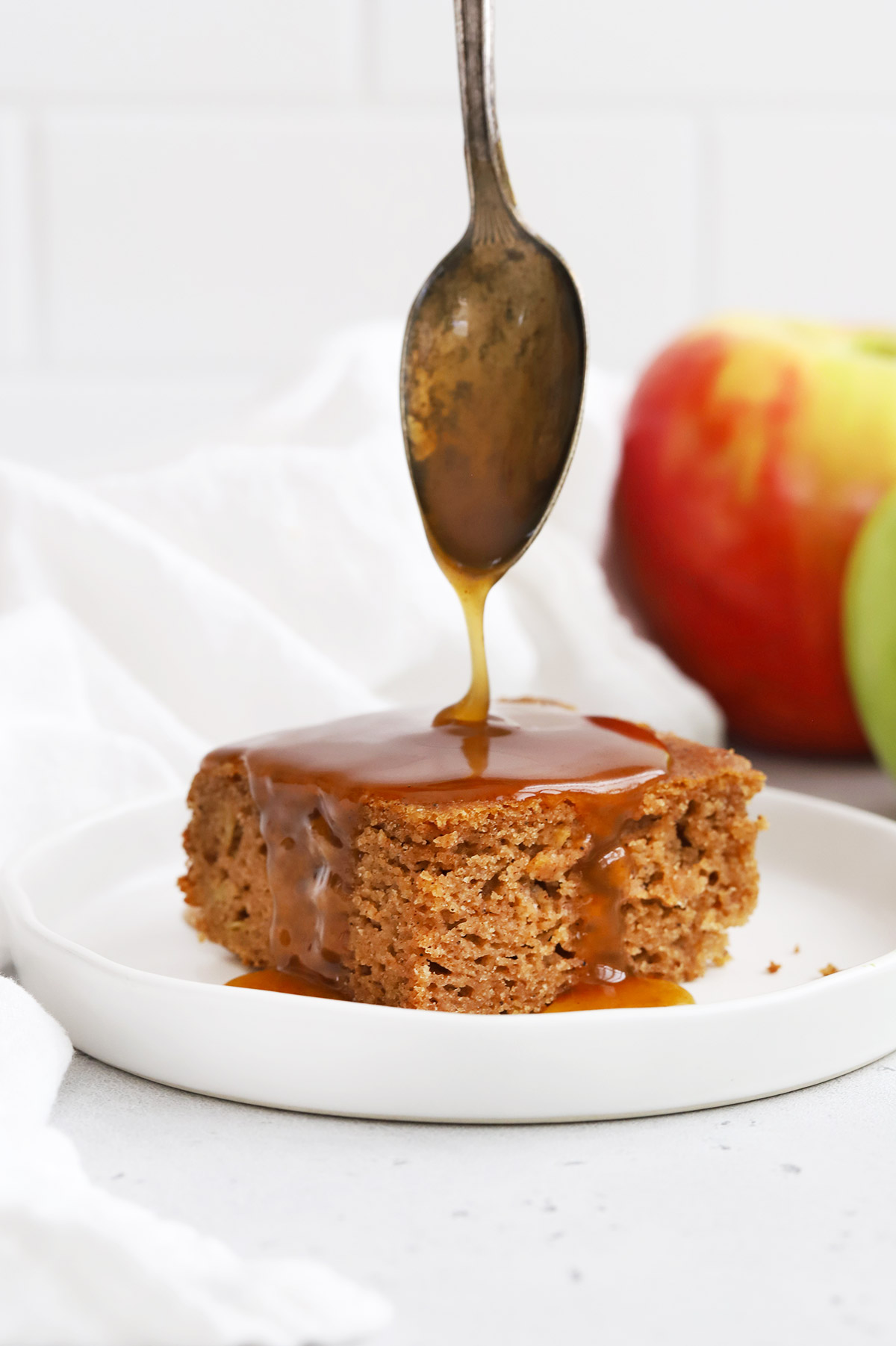 FAQ + TIPS AND TRICKS FOR THE BEST CIDER CARAMEL SAUCE:

CAN I MAKE CIDER CARAMEL WITH APPLE JUICE INSTEAD? I really prefer apple cider if you can get it, but if you can’t, you *can* use apple juice. The flavor will be a little less rich and bold, but it’ll still taste sweet, apple-y, and delicious. If possible, look for a cloudy apple juice rather than a perfectly clear one. Cloudy juice tends to have a more pronounced flavor, in my opinion.

HOW TO MAKE VEGAN CIDER CARAMEL SAUCE. If you’re vegan or dairy-free, you simply need to use vegan butter (like Earth Balance) instead of regular butter! The rest of the ingredients are all vegan-approved.

CAN I MAKE THIS USING COCONUT SUGAR OR MAPLE SYRUP INSTEAD? If you’d like to avoid refined sugars, I actually recommend you stick with the recipe in this post instead. It’s vegan, refined-sugar-free, and fits the bill nicely. Swapping out the sugar in this apple cider caramel recipe won’t give you the same texture or flavor results.

HOW LONG DOES CIDER CARAMEL STAY FRESH? My cider caramel sauce will stay fresh in the refrigerator for about a week. It could probably go longer than that, but we tend to use it up before then! 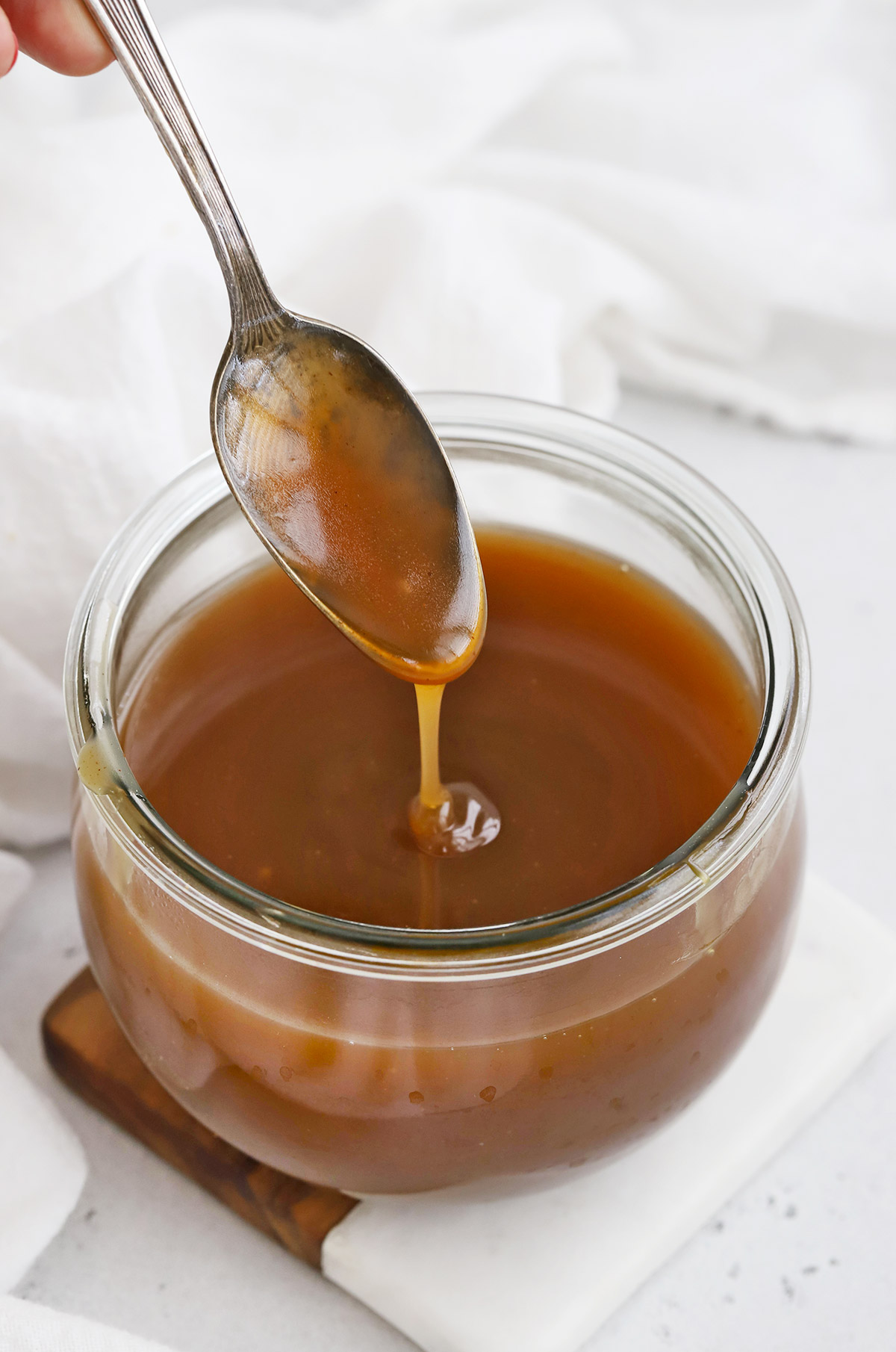 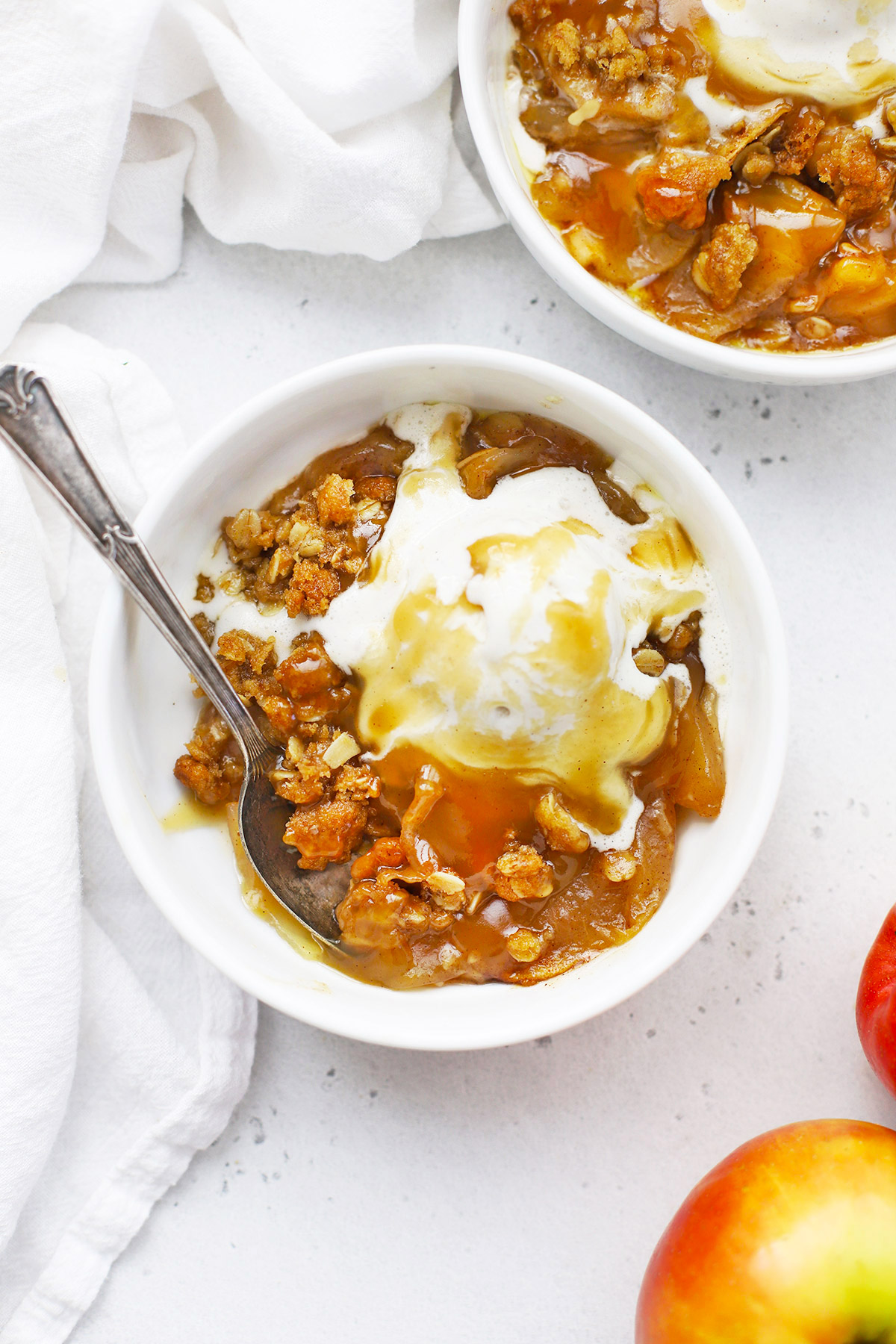 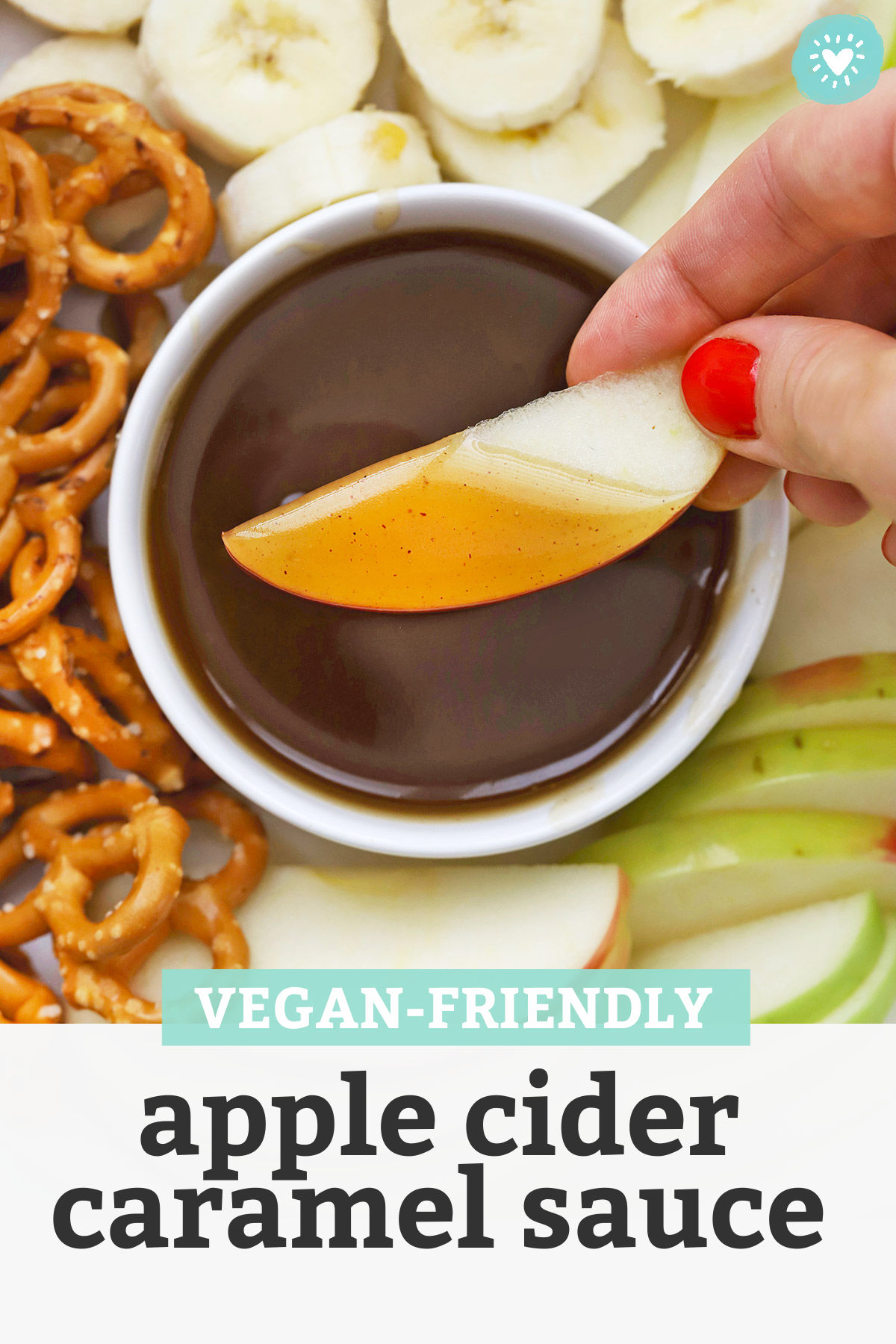 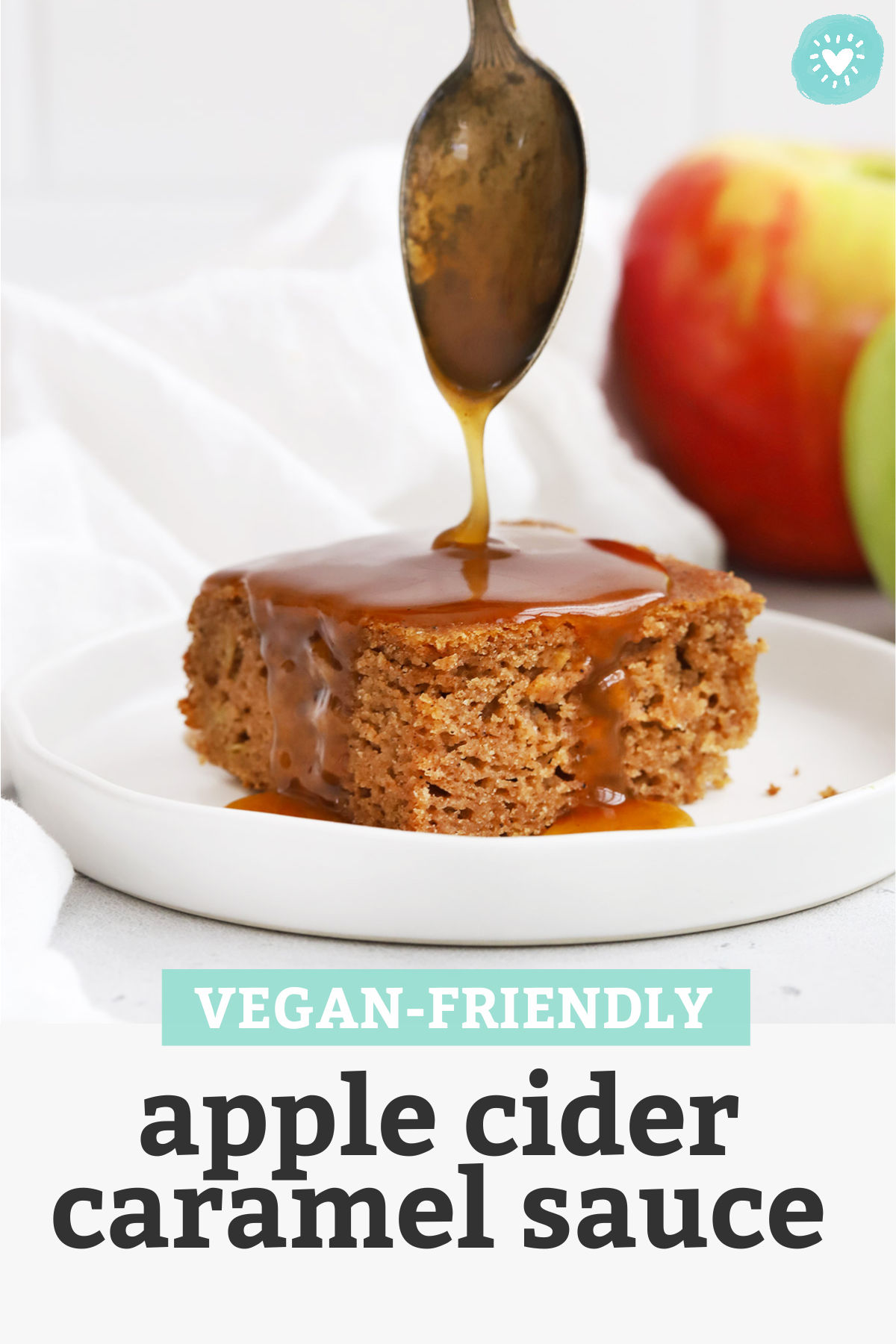 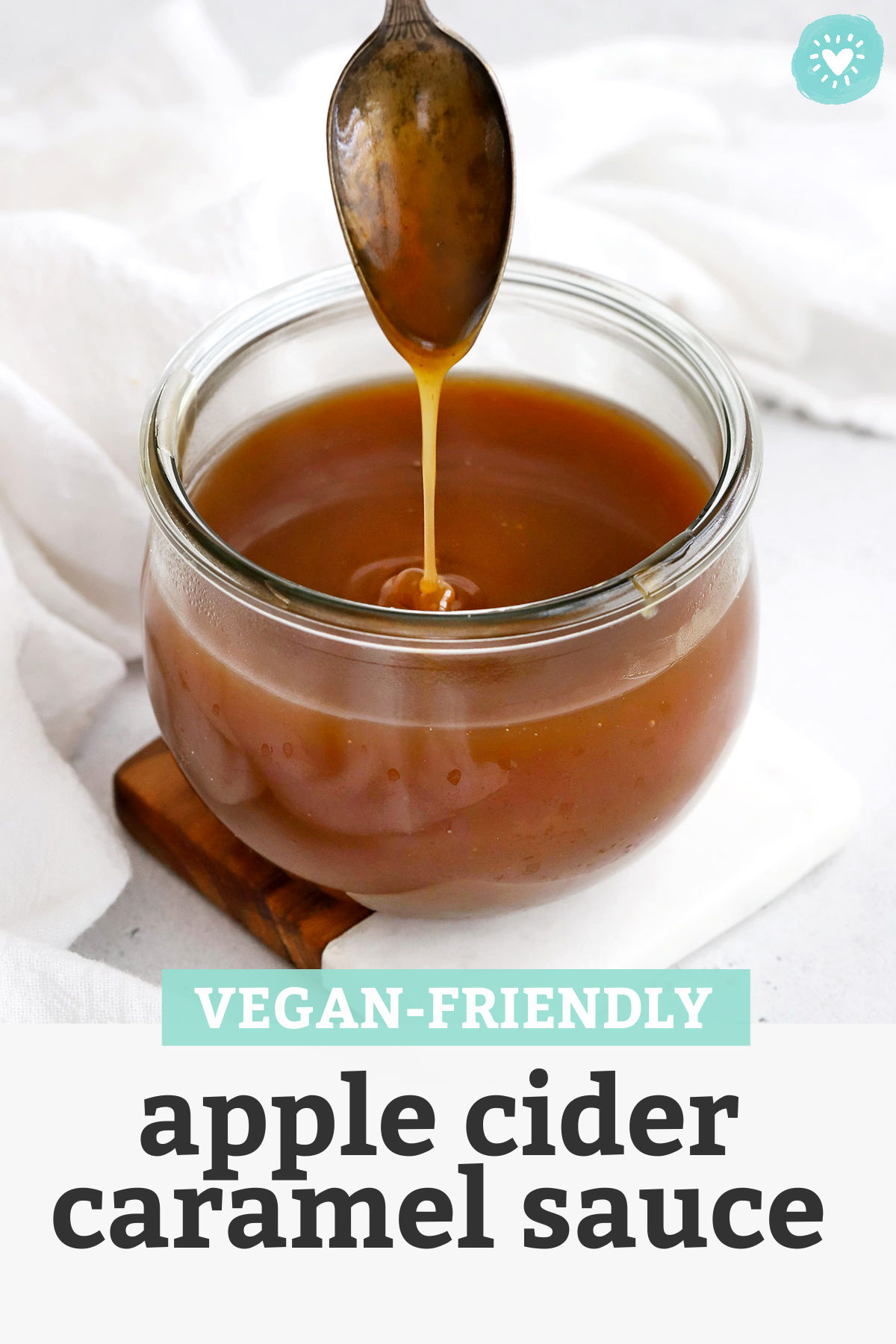 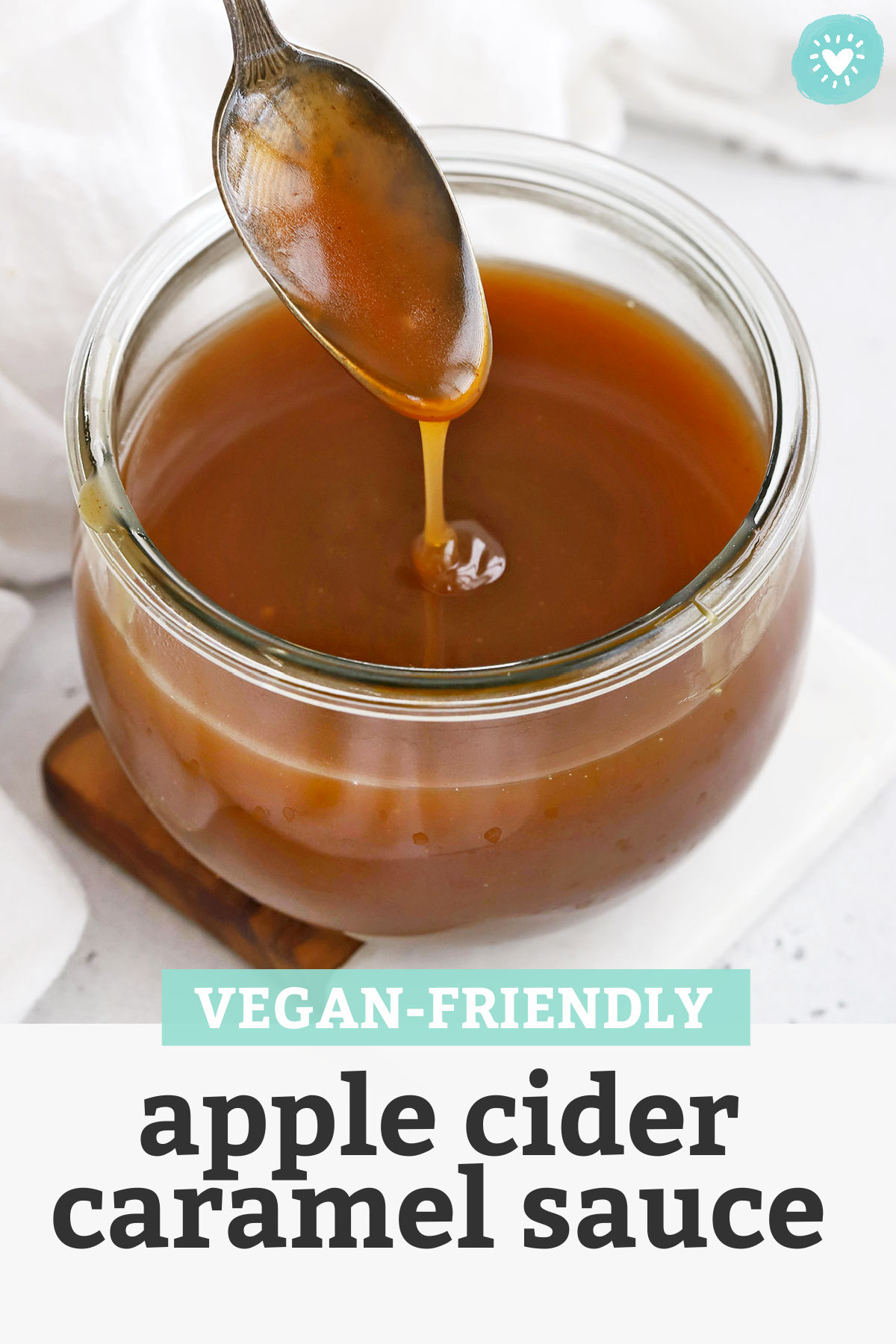