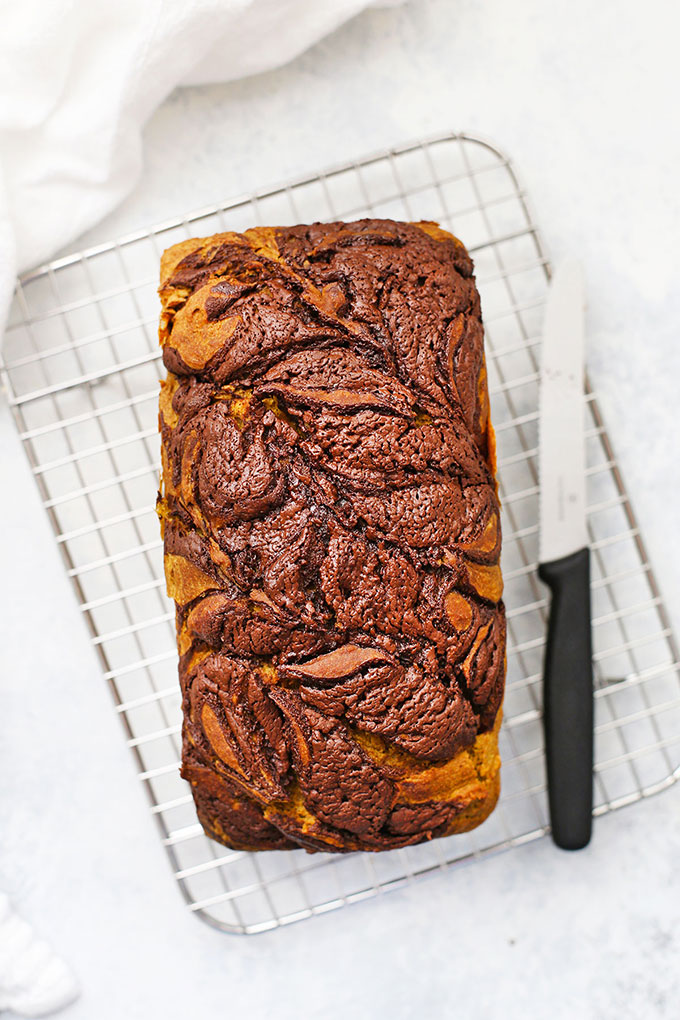 ‘Tis the pumpkin season!!!! Who else is cheering?!

We eat pumpkin all year round at our house because we love it so much, but now that we’ve crossed the threshold into “official” pumpkin season, I feel like it’s finally time to share this gluten free pumpkin bread. Can I tell you I started testing this recipe in July?

With the chocolate cinnamon swirl and perfect blend of spices, this Gluten Free Pumpkin Bread is the perfect way to kick off pumpkin season! 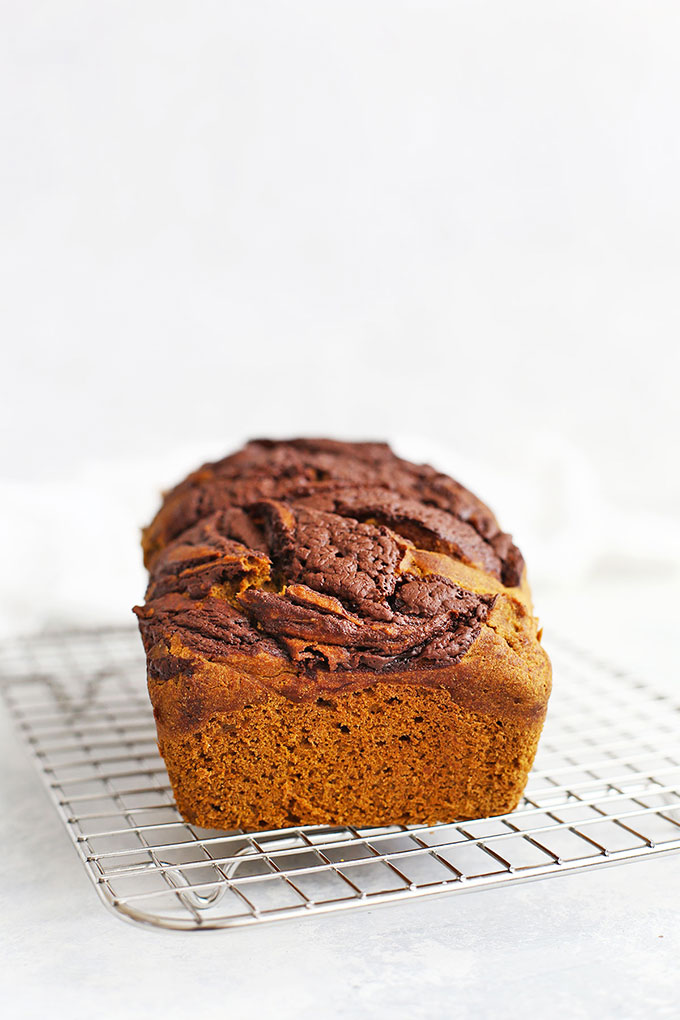 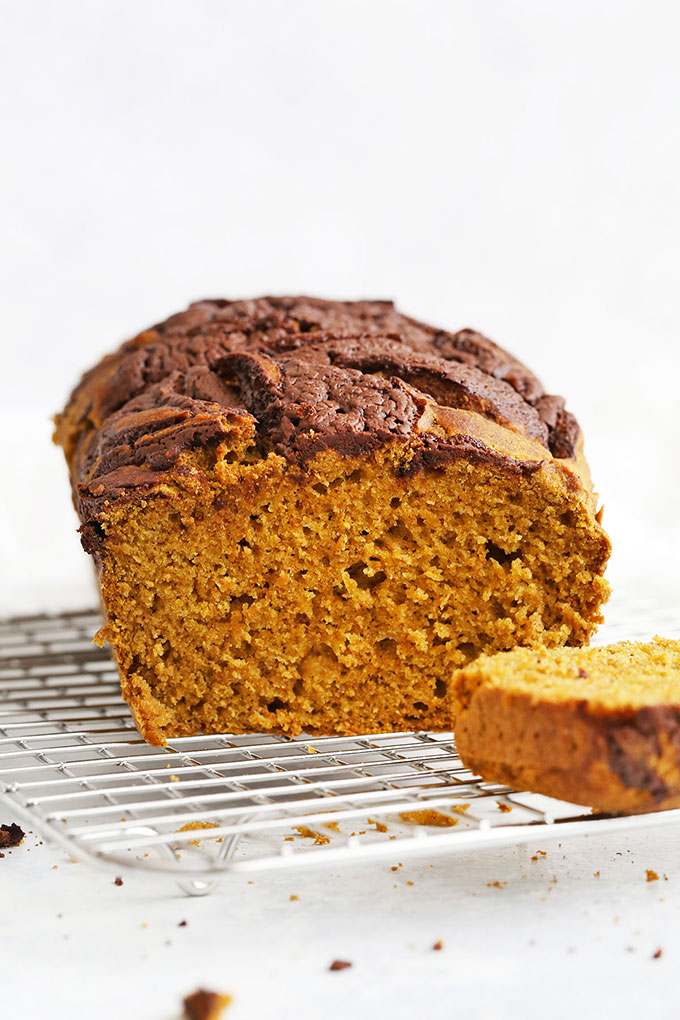 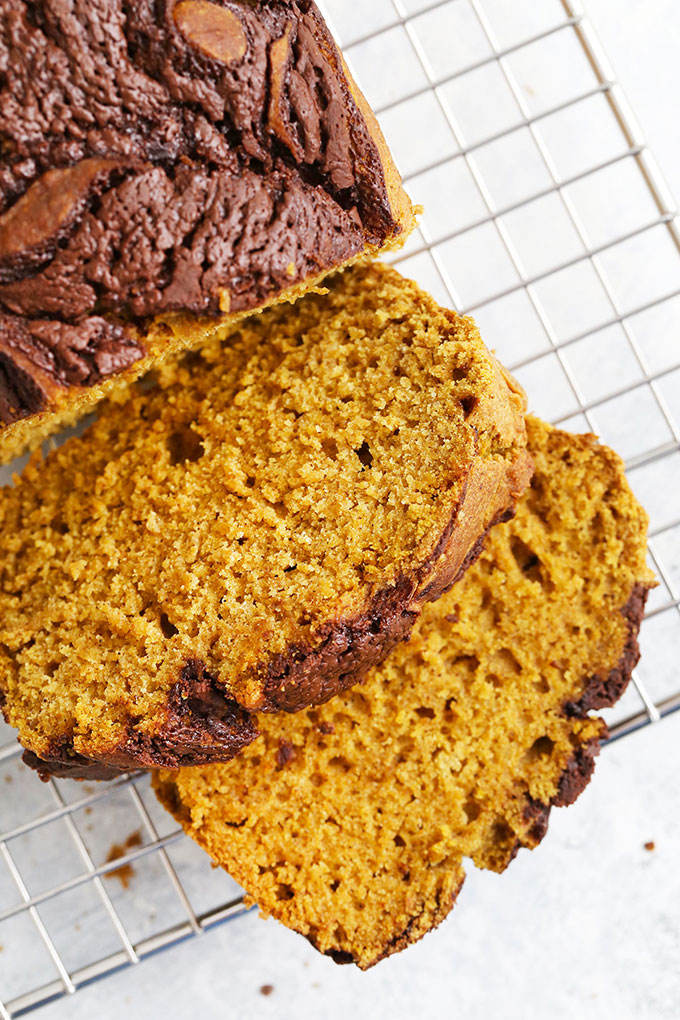 PUMPKIN PUREE. The perfect base for this pumpkin bread. Pumpkin puree keeps this tender and moist. (Do be sure you’re buying unsweetened pumpkin puree, NOT pumpkin pie filling. Sometimes the cans look the same!)

BUTTER, VEGAN BUTTER, OR COCONUT OIL. I love the softness this brings to the pumpkin bread. You can use regular butter, vegan or dairy-free butter, or melted coconut oil for this recipe. (If you go the coconut oil route, know that refined coconut oil will have less coconut flavor than virgin coconut oil.)

VANILLA & WARM SPICES. After a bit of testing, I landed on a sweet, warm combination of vanilla, cinnamon, nutmeg, ginger, and cloves–pretty usual suspects for baking with pumpkin! I love the balance of spices. There’s plenty to taste without it being overpowering. (We’ll add even more yummy flavor with the chocolate cinnamon swirl!)

GLUTEN FREE FLOUR, BAKING SODA & SALT. Everything you need to get the right puff and rise for gluten free pumpkin bread. I’ve used a cup-for-cup gluten free flour blend here. My two favorites are this one from King Arthur Flour and this one from Bob’s Red Mill. They’ve got the best texture and flavor, in my opinion. Note: You can’t substitute almond flour or coconut flour in this recipe without re-working the amounts of the other ingredients. You *can* substitute traditional white flour if you’re not gluten free.

CHOCOLATE CINNAMON SWIRL. This is where the magic happens. After pouring the pumpkin bread batter into the pan, you’ll drizzle on a melted combination of chocolate chips (these are dairy free), butter/coconut oil, and cinnamon. Next, you’ll gently swirl the chocolate mixture into the top of the batter and pop it into the oven to bake. Believe me, you’ll wish the swirl was in every single bite! 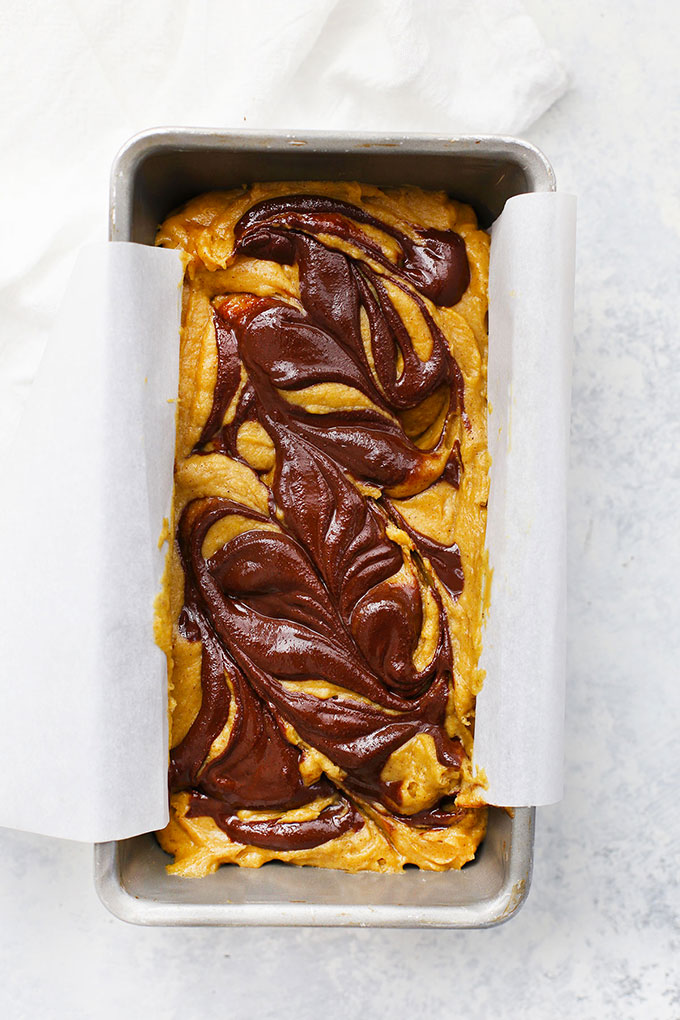 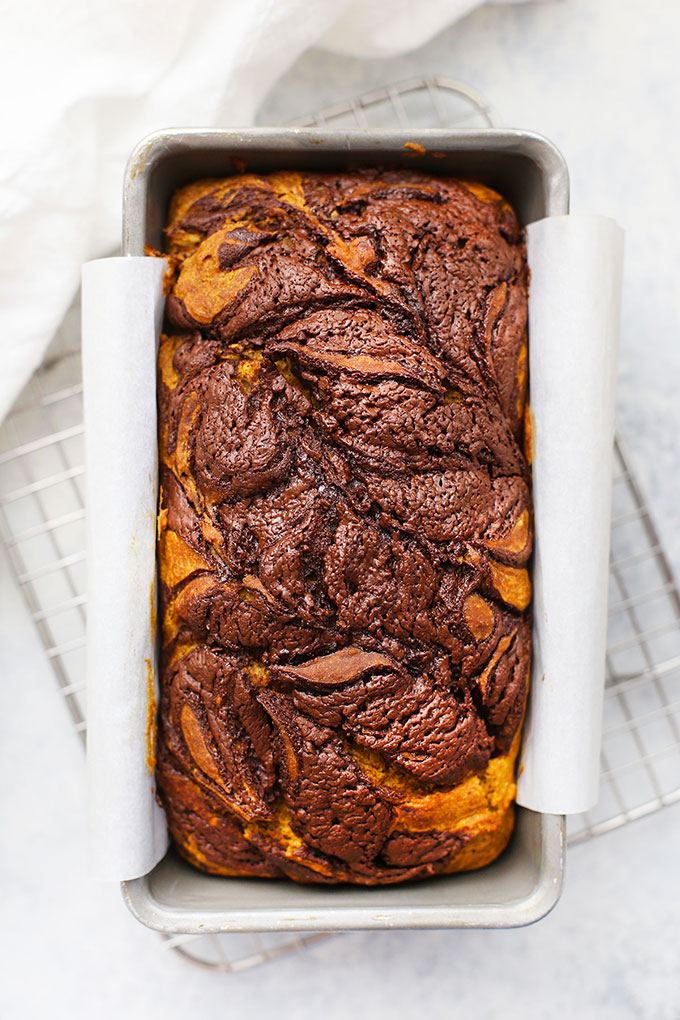 TRY NOT TO OVER-MIX THE SWIRL. Believe me, it’s easy to do. I used to get stuck in the trap of “oh, maybe just one more swirl over here… Oh! And one more over there…” and, before I knew it, the whole top was an over-swirled mess. You can watch the video for my method, but you’ll get the prettiest gluten free pumpkin bread if you don’t over-swirl.

THE BEST DAIRY FREE CHOCOLATE CHIPS. If you’re looking for a good dairy free option, we really like these ones and these ones. They’re both increasingly easy to find and taste amazing. No one ever knows the difference!

CAN I MAKE THIS VEGAN? I think so, but I haven’t tried it yet. You’d need to substitute 2 flax eggs or 2 eggs’ worth of a powdered egg replacer like this or this. (If you try it vegan, please let me know how it turns out!)

WHAT SIZE LOAF PAN DO YOU USE? I typically use a 1-lb loaf pan for this recipe. (9″x5″ or 8.5″x4.5″) If yours is wider or longer, your baking time may vary slightly (the wider the pan is, the quicker it’ll cook). I also prefer a lighter colored pan because they tend to distribute heat more evenly and gently than dark pans. 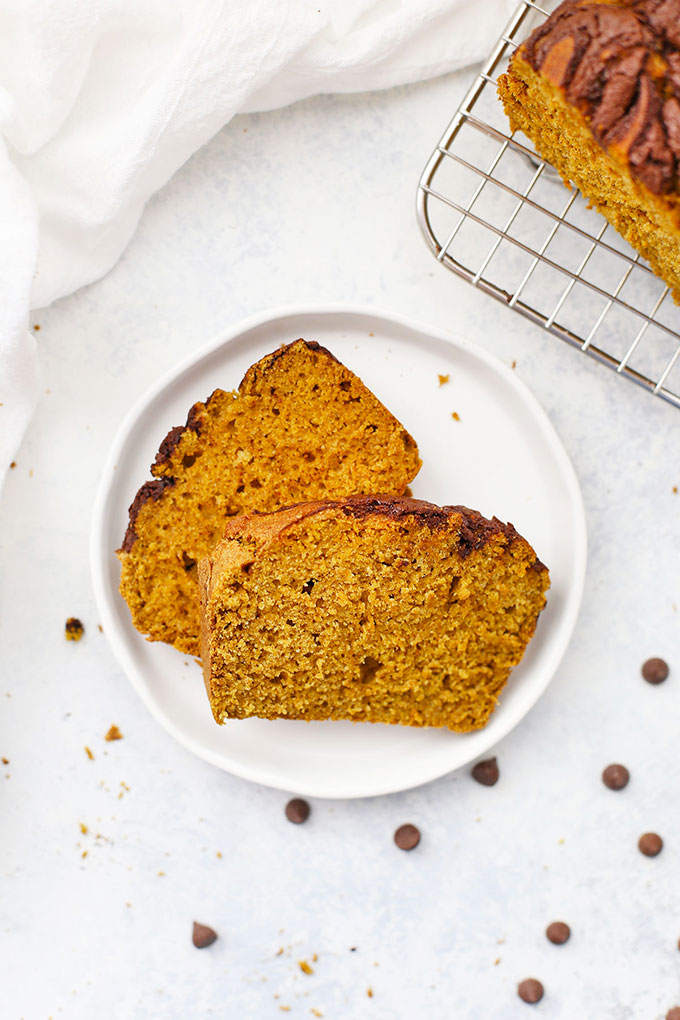 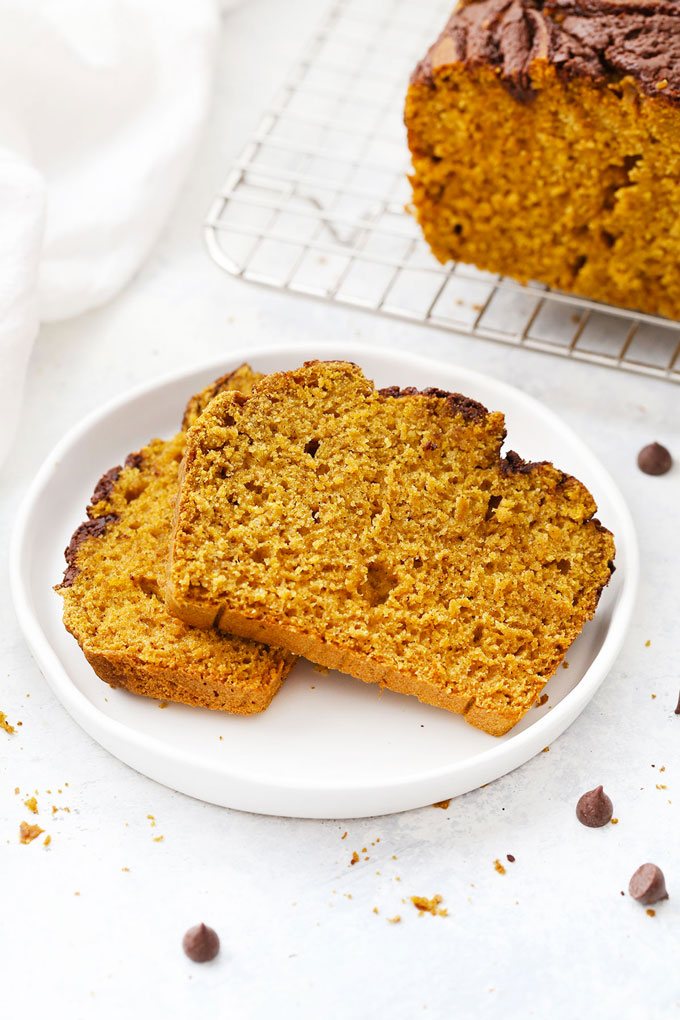 For the Gluten Free Pumpkin Bread:

For the Chocolate Cinnamon Swirl: